Management: While my opinion of the show is generally positive overall, this essay, by no means, is meant to serve as a comprehensive review, but rather, as an articulation and analysis of some of what I feel is this series’ most integral and interesting themes. The piece takes primary reference from Episode 22, “The Doll that Took a Detour.” 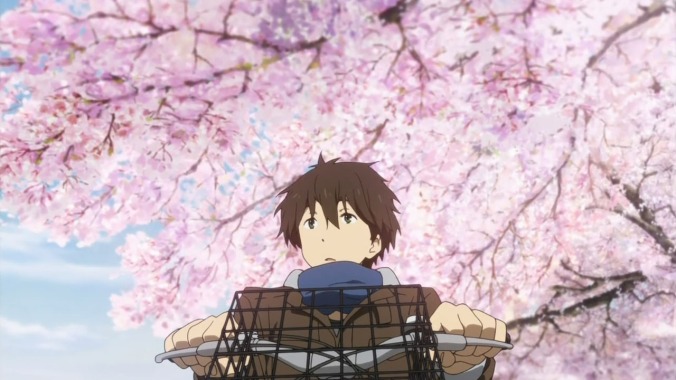 It is the ending of an episode that ends this Japanese Hyouka season, “The Doll that Took a Detour.” It is the Hina Doll Festival’s end.

The many men responsible for the celebration, having proceeding from one village to the next by procession, allowed themselves feast and merriment for the duration. The women, formerly in ceremonial wear, have likely dressed themselves more casually for the after affair, dusting off the cherry blossoms that caught on them from the air, having put away the clothes and props they need for next year’s fare.

These people are old. The festival is old. The dispute that brought about the tradition of the festival is old. The momentary dilemma between the two villages that nearly disrupts the procession’s route… it hearkens from old.  As Houtarou Oreki and Eru Chitanda walk from the festivities back to their respective homes, the latter turns to the former within the vicinity of the cherry tree, blossoming out of season, to say something. She says something like this to him.

This land is dying.

END_OF_DOCUMENT_TOKEN_TO_BE_REPLACED

Saenai Heroine no Sodatekata. How to Raise a Boring Girlfriend. Saekano henceforth, because the last two show titles are a bit long and indicative of LN titles these days. What’s also somewhat indicative of this show’s relationship with the LN trend (besides being adapted from a series of LNs) are the myriad tropes that people, familiar with LN narratives (as well as narratives in VNs, anime, manga, Japanese video games, or basically anything seen as moe… what I will henceforth call “otaku culture”), are likely to nod to/groan to/are sick of. Whether one is entertained or annoyed by these tropes in any given show will depend on the person watching, what they is entertained by, and what they want out of shows in general.

Saekano’s head stands out from the thicket as a show that’s absolutely, energetically, unabashedly shameless in its presentation of otaku tropes. The show doesn’t necessarily stand independent of these tropes however. It’s feet are firmly hidden within the trope thicket, with almost all of the recurring series characters unambiguously characterized according to a combination of tropes. The show’s premise are three unambiguously attractive and talented young women vying for the affections of one male otaku protagonist. It all seems like blatant otaku wish-fulfillment. To a degree, it is, based on the set-up. This pristine setting of otakudom, however, is blotted by a couple of things that makes the show just as much a commentary on otaku as it is a love letter to them.