Management:  While my opinion of the show is generally positive overall, this essay, by no means, is meant to serve as a comprehensive review, but rather, as an articulation and analysis of some of what I feel is this series’ most integral and interesting themes. 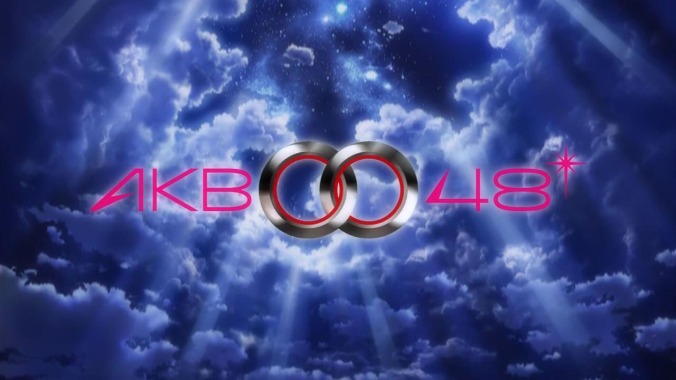 While the audience during the show was treated to insider information  about the motivations of the idols and the mission of idols’ organization, the DES was treated, more or less, as this large, amorphous, and ambiguous force that sought to destroy singing and dancing and idols and entertainment. Why? Because EVIL? Because the show treated them as clear EVIL,  AKB0048’s mission would be seen all the more as GOOD, because the alternative is EVIL? Is play all good then, and work all bad? Musing on the show more, I would say the answer is neither.

AKB0048 is an overt reference to the real idol group AKB48 (with the former being portrayed in the show as the space-era successors of the latter). AKB0048’s home planet of Akibastar is another overt reference to Akihabara, the part of Tokyo that currently acts as the oasis for otaku and served as the original staging pad for AKB48. You might think that AKB48 is an idol group primarily supported by otaku. To be sure, the idol group performed primarily for the otaku when it just started.

However, AKB48’s mainstream status today in Japan is reflected in the legions of fans it commands throughout Japan and the Asia-Pacific. AKB48 is large and popular enough in Asia that it has its own idol cadet branches and idol inspired groups in South Korea, Taiwan, and Indonesia. The Japanese government appointed a man, responsible for managing AKB48 operations, to a premier position for mass organizing the upcoming 2020 Summer Olympics in Japan. 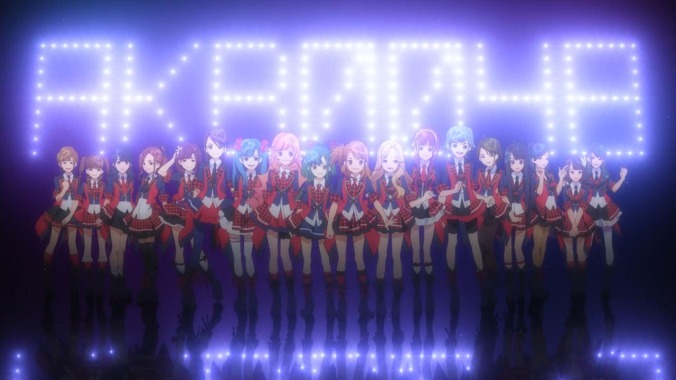 To dismiss AKB0048’s message about entertainment as a ringing endorsement of the otaku’s stereotyped manta, “no work, all play,” would be ignoring the myriad of others in the Japanese mainstream (“normal people,” in other words) who also consume their music, attend their concerts, and buy some of their merchandise. AKB48’s broad appeal can’t be just chalked to those niche things that those weird, freaky, disgusting, anti-social otaku like wanking off to.

If we assume that “the myriad of others in  the Japanese mainstream” are normal because they have stable jobs and family duties, then it appears that the show’s message about entertainment is more nuanced than a simple rejection of social responsibilities. It is, rather, a qualification about how people should organize their priorities.

In AKB0048, play is not seeking to have people abandon work altogether. The battle idols, in their encounters with their armed anti-entertainment opposites, strive to incapacitate them, not outright eliminate them. Additionally, the idol group seeks to flip planetary entertainment-banned policies to entertainment-accepted ones. Absent is their pursuit of work-banned ones, or entertainment-only ones. Work, and hard work, remains important in the show as virtues worthy to strive for. The efforts put in by the idol support staff and the idols themselves to maintain the AKB0048 enterprise is a form of work. It’s kitchen stove cooking and concert time booking, stage set practicing and battle stage training. It’s work, work, work, and work. But it’s work that’s also play or includes play. It’s a life that balance between work and play. It’s a life that’s fulfilling.

Play, rather, is trying to share space with work. Japanese society is known infamously as overworked, where the Japanese clock in more hours on the job than the workers of any other developed country do on average. The ideal worker’s routine in Japan, that of the salaryperson, works late or far away from home where free time and leisure could be spent. The breadwinner returns when the sun has long set, or when the weekend has just begun. It’s a subsistence that’s many in stress-filled commitments and few in cathartic comforts. While touted as ideal in public, this existence tends to be thankless in private. When the macro in the form of growth only matters, it strips individuals of their names, and drowns them and clumps them together with indistinguishable others as they all shuffle and struggle tiredly on the streets and trains to another day on the job. 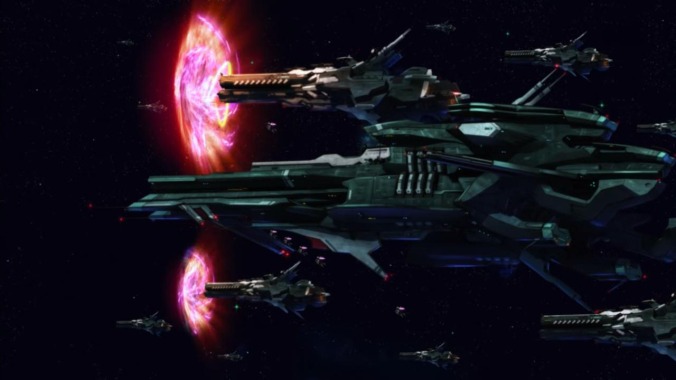 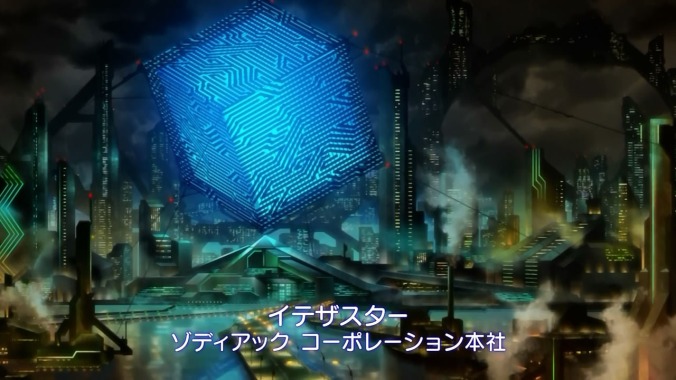 So when I took another look at the antagonistic DES, I began to feel the reason behind why the contents of this organization went unexplored and nameless. It wasn’t because of laziness on the part of the show’s staff. Like being submerged in an ocean of water or being frost-bitten by the northern wind, the DES is a symptom for a system. It is not just a handful of individual elites that are to blame, that want to do away with entertainment and play so that people can focus more on production and work. It is this entire system of comprehensive oppression that presses down on people to work and work and work and work… without any psychical respite. 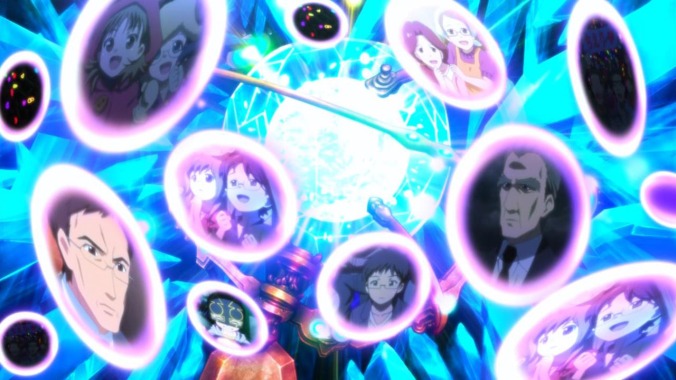 The AKB0048 idols have fleshed-out backstories, episodes of character development, personality, individuality, and, more importantly… names. In interacting with their fans, the idols strive to recall their previous encounters with them, describe what they looked like, call them… by their names.  From the DES side, in Episode 19’s “The Forbidden  Star” in the second season , no one save a private-class soldier named Higashino is actually named, and he’s a fan of idol Makoto Yokomizo. Idol Chieri Sono’s father, who recurs throughout the second season, is only ever referred to in episodes as Chieri’s father.

Not only is AKB0048’s mission dedicated to entertainment, but AKB0048’s whole being is naturally antagonistic to this system of work prevailing over all, because work of that exclusionary nature is alienating and miserable. The forces of play as represented through AKB0048 reject this preponderant depressing ethic about how life ought to be. Like their real-life AKB48 counterparts, they promote an alternative ethic of work with play, of life with balance. Work with play is socially uplifting. The show runs with this theme by combining this social uplifting with political liberation through AKB0048’s guerrilla concerts on entertainment-banned planets. This kind of ethic has produced an audience that cuts through mainstream and otaku cultures. It speaks to those who don’t want the tedium of their work to be all that defines them.

What is also somewhat political and brilliant about AKB0048 is how it juxtaposes images of itself with the zeitgeist pictures of not only work, but defeat in Japan.

The industriousness of the Japanese people was used to produce an intensely nationalistic and hyper militaristic society whose ambitions of grandeur were subsequently leveled into the dirt by the might of the US. Within this society, the individual was subordinated to the nation out of the supposed need for the material prosperity and the martial spirit of the nation. Going into some of the world building about Akibastar, Akibastar was reduced to ruins by war, and the surface of the planet is still ruins. Japan was reduced to ruins in much the same way during World War II. Akibastar post-war was rebuilt beneath these ruins, and post-war Japan was reconstructed  over them. Akibastar is threatened by militaristic forces. Japan is threatened by nationalistic ones. 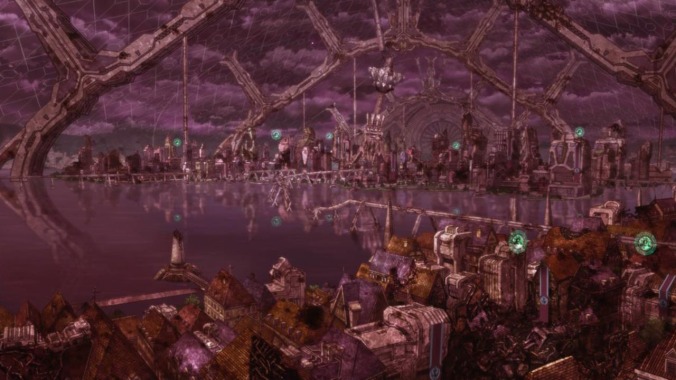 The air of both planet and country are thick with the croons of music, the cries of pacifism, and various levels of light and smoke.