Management:  While my opinion of the show is generally positive overall, this essay, by no means, is meant to serve as a comprehensive review, but rather, as an articulation and analysis of some of what I feel is this series’ most integral and interesting themes.

The intimacy present through farming professions and small communities, the close proximity of it all, characterized many a Japanese village. At the geographical heart of these villages lay the shrine. Manned by a regionally itinerant or locally designated cleric, these sacred spaces lay at the communal, spiritual, and cultural heart of village life. Priests were more directly accessible to the locals for consultation and guidance. Festivals of catharsis, reflection, jubilation, and gratitude were practiced on religious grounds. As people had ample and easy opportunities to engage regularly with their faith on a variety of facets and devotions.

Devotion to Shinto since then, and even general interest, has seen better days. Many Japanese drained from the countryside and flooded into the cities. Having lived all their lives within concrete jungles, generations became removed from the pastured plains their ancestors once tended and tilled. Unsurprisingly, men and women within these more recent generations have become more distant from the religious  traditions their ancestors fervently practiced.

Because of its distinctly Japanese origin and focus, inextricably tied to Shinto is the accumulated knowledge, or culture, of Japan of centuries-to-millennia past. The majority of Japanese now live busy lives in crowded metropolises, with less time, less space, and less priority to approach the priests or celebrate the festivals. When the shrines are occasionally visited (on holidays, exam days, and extraordinary circumstances) the rituals performed are far from demanding. A coin is thrown, a charm is purchased, and a short prayer is muttered in the hope that requests will be somehow fulfilled, as though wishes are like cheap transactions at a convenience store. Many Japanese today partake in Shinto activity with only the vaguest notions of this religious tradition’s richness. When the older generations of the countryside step aside and the newer ones of the cities take the reins, Shinto will seem vaguer still.

And so, invoking the sort of forces I covered in this post that turned KanColle fans into history buffs, the setting and characters of Noragami are rich in the stuff of tangential learning. In its own way, the show is an updated, contemporary, “hipper” anime attempt for the youth that will inherit the country to preserve their cultural heritage. 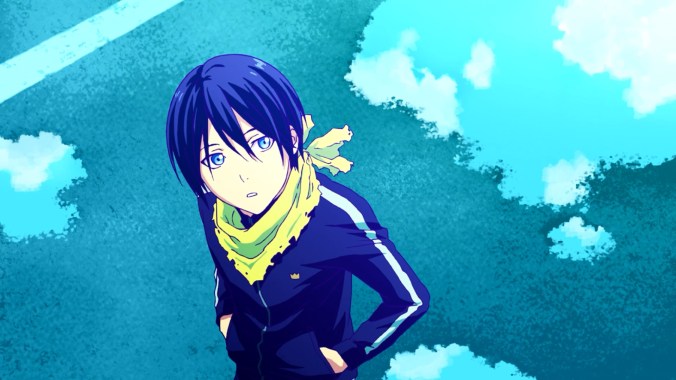 Yato is relatively unknown deity, or kami. He wears a track suit scrounged from a discarded bag of clothes. He bums off his fellow kami for shelter and meals. And he does a number of odd jobs where he demands a pittance in compensation, or offerings, in return. In the world of Noragami, the lives of kami depend on memory. Gods walk amongst mortals, and mortals can interact with gods. Memories can be fleeting for people, however, and memories of the gods are especially ephermeral. Memories of people’s interactions with kami fade from the mind without constant and refreshing interaction with kami. If a person’s attachment to a kami is fairly weak, forgetfulness of that kami’s existence washes almost immediately after initial interaction.  When people cease to remember a kami, that kami ceases to be able to initiate remembrance. They cease, in other words, to exist.

Without the benefit of physical mooring to the world of mortals in the form of frequented written records and dedicated shrines, Yato does odd jobs for people. In the long-term, he hopes to collect enough funds from these jobs to purchase grounds and materials for a shrine of his own. In the short-term, he hopes that by doing these jobs, he can keep people from forgetting that he exists. When they pray for things and offer things in return, their minds remember their interactions with him. For that brief amount of time he listens their prayers, accepts their offerings, and grants their requests, he can remain alive for that much longer.

This arrangement not unlike a tourist on a hot day walking into a convenience store for a cool beverage. The tourist pays for his drink, walks out briefly grateful, and cease to give the place much thought. Similarly, people who interacted with Yato for that one transactional deal forget him shortly thereafter.

The kami, utilized in the series are manifested as rather personable and relatable people. The kami exhibit a range of personalities and emotions that are not unlike what people are capable of embodying and experiencing ourselves. In the hustle-and-bustle of people’s lives in cities, where people’s days involve doing one thing after another, people’s expectations are expressed through shortened-attention spans and instant gratification, and people’s concerns are oriented inward in indulgent manners, there are aspects of our lives that they may neglect and ignore entirely. They may be relationships to heritage, relationships to others.

In the context of Noragami, it is a metaphorical matter of both in the case of Yato. Unlike the kami of our world who cannot express their displeasure to Japanese at being snubbed by society, Yato can express for the audience of his story his anxiety at constantly being forgotten. Whereas we cannot hear the kami of our world raise any protest at their oblivion from (much less trivialization of) memory, we can see, hear, and feel Yato’s worry and despair at the very thought. 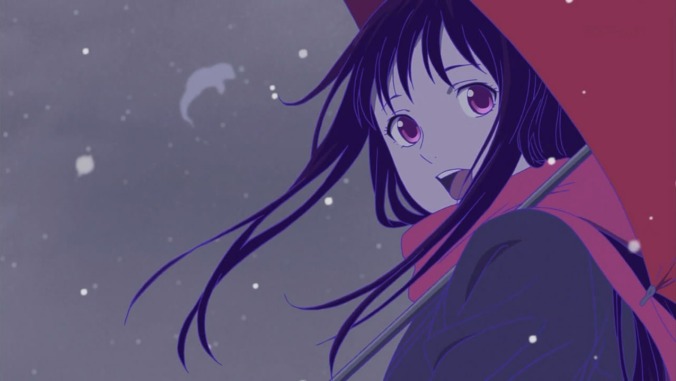 Hiyori Iki is a wrestling loving, somewhat air-headed city girl who, upon being struck with a car of a condition (in addition to an actual car) becomes bound between the reality that mortals experience and the reality that divine kami experience. While she may enjoy being able to jump large heights and fondle her tail in a “spiritual” form, she must leave her physical form (aka her physical body) behind in order to do so. She has no control of when she leaves from it, her body falls into something between a nap and a coma when it happens, and if her spiritual form stays out for too long, she can die. The reality that kami have to deal with can be a very frightening and dangerous place to see and be in.

Hiyori requests of Yato initially to fix her, initiating a transactional relationship. However, as they hung around each other’s sides by necessity, they began enjoy each other’s company earnestly. Hiyori learns to appreciate Yato beyond the service she originally requested of him. She makes Yato a small art-and-crafts shrine, a physical marker that he is remembered and he exists, that drives Yato to tears.  She remembers Yato after being separated from him for a month, unlike all those other people that prayed to Yato before, because of how closely intimate her feelings have become for him. She yearns for Yato despite her separation from him being the key to fulfilling her original request of fixing her. It’s as though her happiness is being devoted to Yato.

The transactional relationship of asking for a favor from a kami turns into a communal relationship of living happily with one. The bond between Hiyori and Yato is like village festivals dedicated to divine kami. Japanese villagers in the past held festivals not only for their own benefit, but for the benefit of the kami they pray to, are blessed by, and walk amongst them. In the dance-filled, food-filled, melody-filled revelry, full of swaying, full of smells, full of sound, the actual happiness of villagers in the moment become intimately connected with the perceived happiness of the kami they have, in part, thrown their festivals for.

As we are entertained, enthused, and engaged in Yato’s antics and trials in Noragami, the show reminds indirectly us that his existence in fiction that we enjoy is only possible when there are people that still vividly recall, and are avidly interested in, that aspect of their cultural heritage. That culture also includes Shinto. And indeed, people today, such as Noragami’s creator, still remember, appreciate, and find pleasure (if not profess stern belief) in Shinto lore, despite the absence of those social structures of village life that once prompted many Japanese in the past so devout in the first place. Noragami’s not exhorting viewers to become a Shintoist or become religious. Rather, it’s persuading them, through an culturally accessible form of media, to become more interested in learning more intensely about Shinto. In this way, perhaps, the demographic Noragami caters to with its anime sensibilities, young Japanese urbanites, can also learn to cherish their heritage.

4 thoughts on “Noragami: A Prayer for Forgotten Gods”