Non-management: This is ZeroReq011, providing a long-overdue courtesy update. In brief, I’ve been fairly inactive and unproductive on social media and my blogging site as of late due to a couple of things. I’m still in that transitional stage of financial instability (aka looking for work), and I’ve been mentally dealing (or more like coping) with the mental fallout of the recent election. Reading books and studying Japanese have also taken a hit in my previously formed mental plans.

Both blues have been making me unmotivated to write or consult any talk of current events or political discussions that aren’t strictly at the local or abstractly at the theoretical level.  My Twitter page is set up as a news aggregator, and those I follow have been going through different stages of vocalized grief. Me? I’m firmly still at that stage of wanting to hear less of it, and the job search has been pretty stressing on me as it is.

END_OF_DOCUMENT_TOKEN_TO_BE_REPLACED

Management: While my opinion of the show is generally positive overall, this essay, by no means, is meant to serve as a comprehensive review, but rather, as an articulation and analysis of some of what I feel is this series’ most integral and interesting themes. This post comments on the events of Hunter x Hunter’s (2011) Chimera Ant Arc. 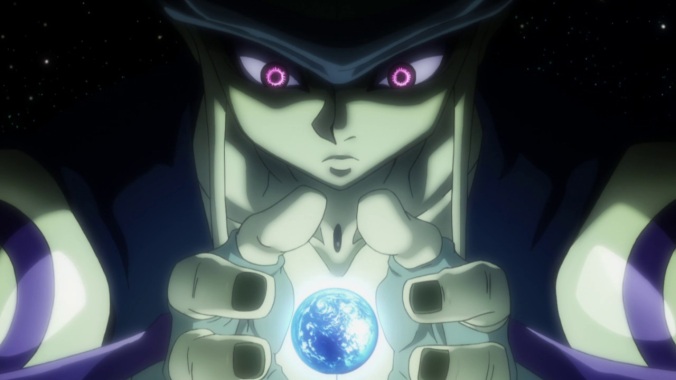 Meaning in language, connotative meaning especially, is not fixed. Folks possessing historical perspective are probably aware of at least a few words that, at one time, were once universally regarded with positive or neutral connotations and, at another, ended up being seen by many as negative or controversial. “Progress” is one of those words, associated as it was during the periods of Enlightenment and Modernity with those once unequivocally righteous virtues of industry and science. Industry and science have since been problematized by discoveries such as carbon footprints and nuclear energy — the stuff that could end worlds. “Evolution,” a concept related to “progress,” is another.

Hunter x Hunter (2011)’s Chimera Ant Arc  frames the concept of evolution in both its more strictly physiological and more expansively utility-driven understandings. The show then ties evolution to the traditional shounen battler theme of self-improvement. Out of this relational framework, a powerful statement about evolution is made that ends up reflecting the general ambivalence the Japanese psyche has with such a concept, much like its mixed-feelings with the word “progress.” Like the word “progress,” evolution is not a concept that should be understood as an uncritical good. For evolution — like progress, industry, and science — has the power to create and inspire… and destroy and harm.