Management: This post is Part 3 of a cour-long project consisting of mental notes, observations, and musings of every episode of Kino’s Journey (2017). I will endeavor in this feature to avoid making any comments about the show’s technical aspects, but I may end up comparing it to previous episodes of Kino’s Journey (2003) when the story ground the former covers begins to overlap with what the latter has already explored. 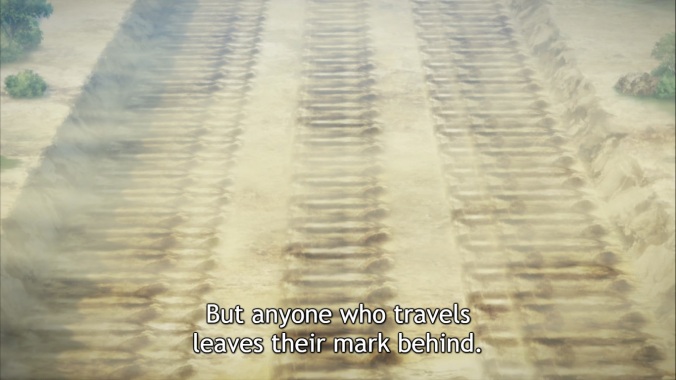 Management: This country was not covered by Kino’s Journey (2003).

Undecided about what to do (and presumably where to travel) next, Kino and Hermes are given their answer something like a fortress emerges into their view. Thinking that it’s a country, Kino decides to check it out. Noticing her down below and confirming that she’s a traveler, the man in charge of admitting travelers and migrants invites her into what is, in fact, his country. It is a country on moving treads. She accepts his invitation and says she’ll stay for 5 to 10 days. He states to her that, like his other countrymen, he juggles multiple jobs. For example, he serves as an immigration officer, the chief diplomat, and  a tour guide.

His country is one that’s heavily modernized and technologically advanced. It bears visual similarities with the technological levels of today’s first world countries (sans the gigantic death laser later brought up), but the anachronistic nature of the show makes his society’s technological levels stand out all the more. The enormous amounts of energy used to power his mobile society comes from a reactor that requires the country to be constantly on the move to prevent it from overheating. That need complements a certain lifestyle that his country’s people have adopted: traveling with their entire country in tow. The moving country travels from one land to another. Drones take pictures of the surrounding vistas and project them onto the country’s interior surfaces for its citizens to enjoy. Graduating primary school classes in this country practice a unique send-off project: they paint a mural of their favorite vistas on their moving country’s exterior surface.

END_OF_DOCUMENT_TOKEN_TO_BE_REPLACED

Management: This post is Part 2 of a cour-long project consisting of mental notes, observations, and musings of every episode of Kino’s Journey (2017). I will endeavor in this feature to avoid making any comments about the show’s technical aspects, but I may end up comparing it to previous episodes of Kino’s Journey (2003) when the story ground the former covers begins to overlap with what the latter has already explored. 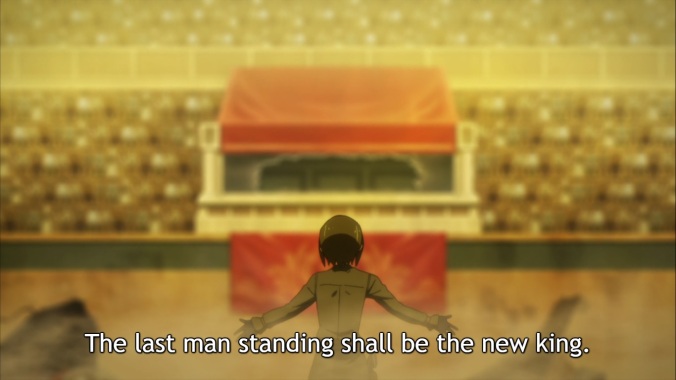 Management: This country was covered by Kino’s Journey (2003)

We begin with Kino and Hermes traveling to the next country after meeting a lady driving a carriage. According to that lady, the country over — the country she just departed from — is a beautiful country with modest people.

Kino, excited, rushes Hermes to that country’s gates. Contrary to the expectations she was given, the country is home to some wretched gladiatorial blood sport. At the center of the country is a Colosseum, a structure that the country’s king is responsible for commissioning its construction and the country’s citizens are enthusiastic patrons of. According to the country’s laws, all spectators, including country citizens, are liable for injuries they may sustain from any stray shrapnel, debris, or projectiles emanating from the fitting pits to the bleachers. The gladiatorial games the Colosseum hosts are 1 v 1 bouts, where the contenders’ death is only eluded if one side wins or accepts the surrender of the other. The surrendered party is subsequently deported (permitted to leave) the country. These contenders are comprised of both  the willing and the forced.  Anyone who immigrates or travels to the country are impressed into gladiatorial service, regardless of their knowledge of this country’s custom or their consent to participate in it. The last person standing after a completed Colosseum tournament is entitled to the creation of one law that the country abide by. Kino is accosted by the guards, who demand that she participate in the Colosseum for king and country’s amusement.

END_OF_DOCUMENT_TOKEN_TO_BE_REPLACED

Non-Management: Recently on my quest to motivate myself to write more, I sent a pitch to Crunchyroll to write something on The Ancient Magus’ Bride, one of the several shows I’m interested in this season and one of the few I’m interested in this season in that Crunchyroll managed to acquire the license to stream. Roughly two to three weeks later, the now realized article is fully published on the Crunchyroll website under their sub-tab of “News.”

The Nature of Magic in The Ancient Magus’ Bride 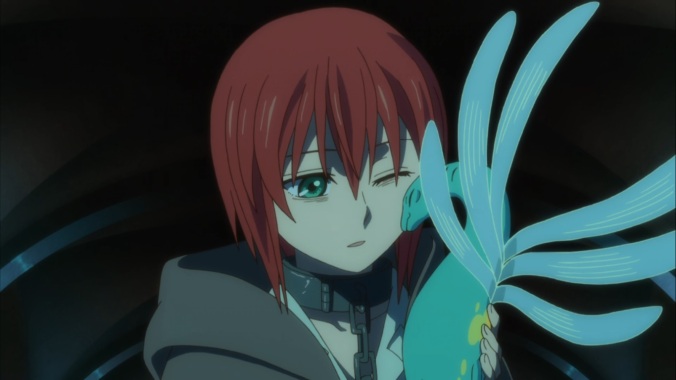 Hollywood and anime have regaled audiences with flights of magical fancy for years. For avid moviegoers and anime nerds, its body of popular magic-themed works have given us a genre of things to expect, and tropes to tire from. It’s a bold thing thing to claim, then, that The Ancient Magus’ Bride does magic special? Why? How? Well, it involves faeries… READ MORE HERE

Management: This essay is meant to be less of a review and more of analysis of the show being examined. It contains plot spoilers for the Fate/Zero anime. 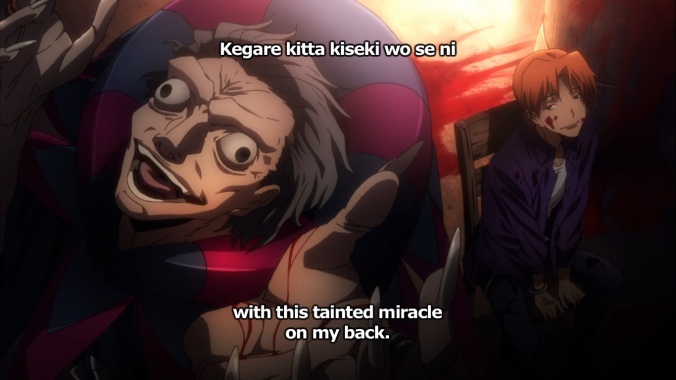 Another Grail war is set to rage. Contemporary sociopathic killer Ryuunoske Uryuu drew a magic occult circle using the blood of a couple he just killed. Historical sociopathic killer Gilles de Rais comes out of it and shows him a new way to enjoy murder using that family’s son. He and Gilles become fast friends, partners, and mentors. In a cruel twist of fate, two serial killers join the fight for the Grail as legitimate contenders for its prize. Qualified competitors are eligible win a legendary artifact, an artifact of yore rumored to grant a wish for any who wins it in a specially arranged death match: The Holy Grail. All they have to do is kill each other. Given the associations the Holy Grail has with Jesus Christ — the supposed God the Son who preached the qualities of his just and merciful God the Father — the fact that such a relic would allow serial killers to participate in its contest seems to put the grail’s sacral character into doubt. Then there are the other problematic aspects about this war that need accounting, like why the Grail would position itself to grant any wish, or why the Grail would tempt people into killing each other for it.

Now, you might think me somewhat unhinged spending time writing about the perspectives of serial killers, but know this. To me, the dialogue the two have touch on an interesting, if despondently cynical, way to understand the nature and existence of the omnipotent entity known as the Christian God. That depressing cynicism is probably the reason why most people refuse to see His Christian Godliness like these two serial killers. What good can come from comprehending God using the arguments of the sadistically perturbed?  A logical acceptance would likely induce despair or madness. Its logical reasonableness may cause a complete loss of faith. It’s a challenge to those who hold to the belief in a benevolent God in the face of evil’s tenacious persistence. It’s evil’s utter existence. It’s the problem of evil that’s the subject of these serial killers’ conversations.

END_OF_DOCUMENT_TOKEN_TO_BE_REPLACED

Management: This post is Part 1 of a cour-long project consisting of mental notes, observations, and musings of every episode of Kino’s Journey (2017). I will endeavor in this feature to avoid making any comments about the show’s technical aspects, but I may end up comparing it to previous episodes of Kino’s Journey (2003) when the story ground the former covers begins to overlap with what the latter has already explored. 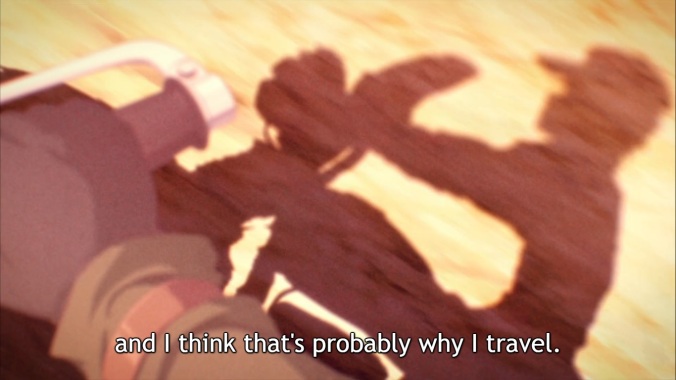 In keeping faith with my love of things Kino — if the blog’s header and name weren’t enough evidence for that affection — I felt it appropriate write and publish my  weekly thoughts (observations and musings) about the (as of the time of this piece) current broadcast of Kino’s Journey. The messages and lessons that the Kino’s Journey  franchises has imparted since I became familiar has been tremendously influencial in how I now view the world. My recent trip to Japan as a traveler has only rekindled my dormant enthusiasm for this franchise. The full title of this broadcast, Kino’s Journey -the Beautiful World- the Animated Series, is an unncessary mouthful to say though, and it’s also a chore to continue copy-pasting. As a result, I’ll just refer to the new anime adaptation of this franchise as Kino’s Journey (2017). If I feel the need to reference the old anime adaptation, I’ll just refer to it as Kino’s Journey (2003).

Notes on Episode 1: A Country Where People Can Kill Others 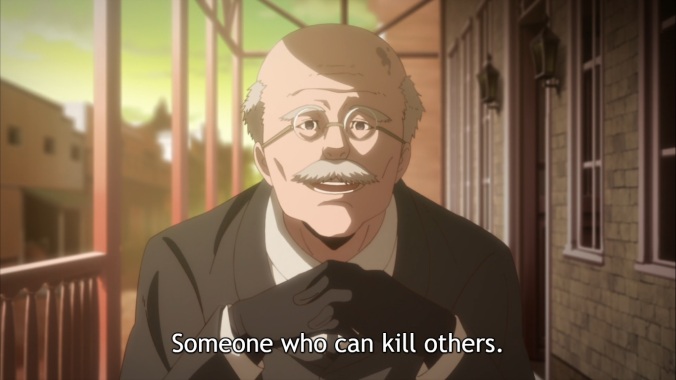 Management:  This country was not covered by Kino’s Journey (2003).

We begin with Kino camped outside. She muses to Hermes about how she likes to travel despite her doubts about her character’s morality. She appears to be getting ready to fall asleep. A revolver lays atop her chest. Her palm clutches the handle.

The opening scene gives the audience a simple introduction to the overarching premise and theme of this franchise. Another way of describing it from the perspective of the literary classes I took in high school. I was asked try to piece an all-encompassing definition for “poetic” based on examples of anything that I reacted to as instinctually “poetic.”  Yet another means to describe it is based on the social science training in college. I asked myself while taking an anthropology course why anyone would concern themselves so devotionally to the study of culture. “The world is not beautiful, therefore it is” seems like a contradiction of logic at first glance, but for Kino, it is actually a paradox of humanity. As human beings, we constantly find beauty in human truths, because even if some of them aren’t exactly flattering, we still find those human truths relatable. It reaffirms to us that, wherever we travel or settle down, we aren’t alone.  If you want to look at this dynamic cynically, as Kino’s musing to Hermes in this scene might seem to suggest, this whole quest for finding beauty in human truths comes off as narcissistic self-validation. But perhaps we, like Kino, can’t help ourselves.

END_OF_DOCUMENT_TOKEN_TO_BE_REPLACED 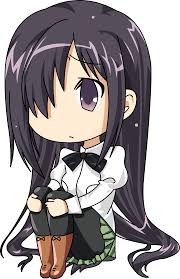 Non-management: This is ZeroReq011, providing a well overdue and uncharacteristically sincere update for this blog. It’s been a long time since I published anything. In the past, I’d blame work or politics, and certainly those factors exacerbate my inactivity. But over the past few to several months, I’ve come to realize what probably played the biggest factor in holding me back from writing, and indeed, from being more productive in general. That factor was fear — fear not externally imposed, but internally manufactured. It was a fear of being compared to others.

It’s a fear different from falling behind, because I have fallen behind some of my Aniblogging colleagues, regardless. Many of them today have turned their blogging habits into full-fledged careers. Frog-kun lives in Japan working at ANN’s expense. iblessall does editorial work for Crunchyroll.  The anime community celebrities that I’ve hung out with at my last convention experience are people who I could never imagine talking to casually were it not for my connections. These connections were those I’ve made with folks more famous than I.