So there’s many little details in Buddhist art and imagery that are actually supposed to signify something important in Buddhism — symbolize some value that the religion itself teaches. Study the iconography of any buddha sculpted or painted, and you might notice that they’re depicted doing something funky with their hands. It turns out that how a buddha’s hands are positioned determines what kind of  Buddhist value is being communicated. A buddha depicted with an open palm forward communicates reassurance to the onlooker from suffering. A buddha depicted with a finger touching the ground communicates the realization by the figure of enlightenment. The same weighty symbolism can be said about a buddha’s eyes, which if you think about it, are often depicted in a manner that doesn’t reflect how people’s eyes normally look. They look like a combination of stoic and placid, and they’re supposed to represent what a person’s eyes would look after they reach enlightenment: aware, mindful, and content.

Of course, eyes have significations outside of Buddhist ones. Eyes attached to a face appear different between the developmental stages of infancy and adulthood. Illustrators and animators have played with how to depict eye composition and movement. Eyes are often said  to be windows to the soul in adage.  Eyes can reveal much about a person’s emotional state upon psychical study. They are associated with qualities related to people in stasis. They also convey qualities about people in action. The condition of Phosphophyllite’s eyes changes over the course of Land of the Lustrous, from wide and doey to narrow and sharp. In fact, the gem’s latter eye set looks positively buddha-eyed. Based off of the show’s more-than-flirtatious usage of Buddhist iconography, I don’t think this resemblance is a coincidence. 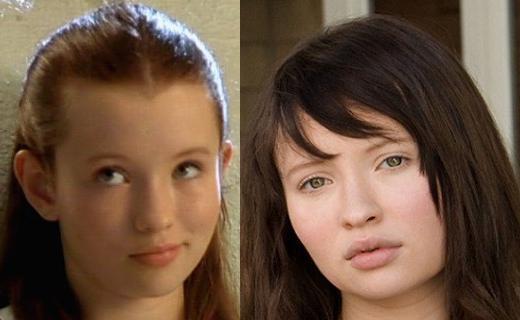 In non-Buddhist contexts, how eyes look and animate are associated with certain qualities in literature and media. In animal development, there’s this condition called neoteny that refers to the juvenile physiological features of an animal. One of these features that neoteny affects is the eyes. Human beings are born with eyes that don’t grow much bigger in size as the rest of their bodies ages. However, human infants and children display naturally wide eyes, eyes with more surface area exposed to the outside world. As human beings transition into adolescents and eventually adults, the human skull grows much larger and the eyes tend to naturally retreat into its sockets. The result is that our eyes look smaller, more narrow. One of the defining features of a baby is their wide and doey eyes, strikingly large pupils laden over a white-melt canvass. Infants and children are often characterized as immature and innocent, as they are introduced into the world ignorant of etiquette and grief. That innocence and immaturity, child-likeness and childishness, has been translated into iconic parlance in one form as the wide and doey eyes as that pop up often enough in human illustration, pictorial and written, because of the many of us that instinctually understand their infantile association. After all, we know what babies look like and how they act, and we were once impotent and mewling babes ourselves.

For many animators, childishness is not the only quality that neoteny-defined eyes are able to evoke. Many cartoons meant for kids deliberately feature characters with these kinds of eyes not only out of kiddish resemblance to their targeted audience — indeed, there are many cartoons with characters sporting these kinds of eyes that are targeted toward young adults instead, many anime. Wide and doey eyes are also very expressive. The subtleties of real-life eye reactions are already plenty expressive themselves, according to contemporary psychology, and many animators simply blow eyes up neoteny-wise so that they can better illustrate or shorthand the physicality of what a character is feeling at any given moment. When pupils dilate, shift around, or contract in neoteny-defined eyes, the feelings that these reactions suggest are communicated all the more noticeably and dramatically to the audience. 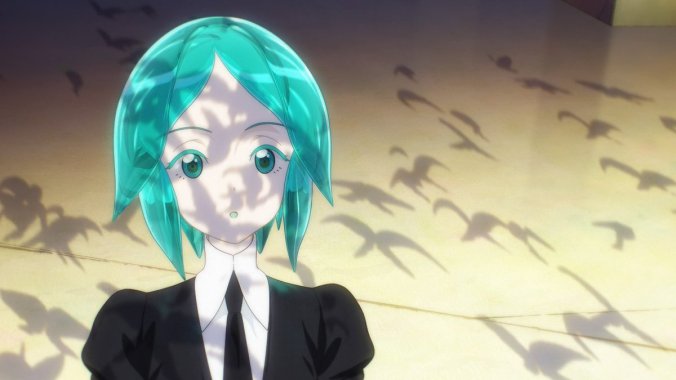 There’s no explicit physiological explanation given for why Phosphophyllite (Phos for short) has eyes that, over the course of Land of the Lustrous’ runtime, mature so rapidly in such a short span of time. Phos is a 300+ year old being  whose eyes that, until the events of the show, remained as they always have been since they were sculpted: wide and doey. There are times in the show’s first half when Phos emotes where the pupils contract, but their eyes always default ultimately back to their wide and doey naturale. Over the course of the show’s events though, which I would conjecture based on the passing seasons to encompass no more than a year, Phos’ eyes would make a radical transition in the second half from the old default of neoteny-defined to a new state of something more adult-like: narrow and sharp.

Phos’ pupils used to be blots. Now they’re more like dots. This transition may arguably be a plot hole, but it’s one that’s minor, and complaining about it misses the probable thematic intent behind the decision to revise Phos’ eye composition. For one, it parallels the other major changes sustained by Phos’ body: their original brittle arms are gone and have been replaced by a malleable gold and platinum alloy reminiscent in form to Cinnabar’s powers, and their hair style has been redone from something previously perky and girlish to something more dour and boyish like Antarcticite’s. 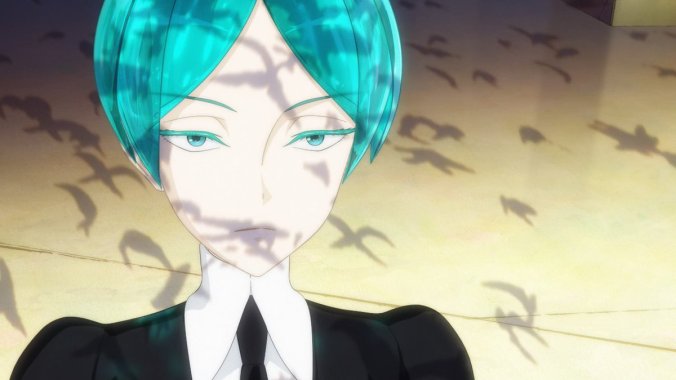 The transition in eye composition neatly reflects Phos’ evolution as a character, as one who began the show innocent, childish, and unspoiled to one that ends the show experienced, mature, and molested. In the 300+ years of Phos’ existence before the show’s timeline, Phos’ life was relatively sheltered and uneventful. In the approximately 1 year of the show’s timeline, Phos’ eyes have seen much — much pain, much grief, much loss, much suffering — and their eyes have been redesigned accordingly to reflect these traumatic weights. To go even further, the change in their eyes parallels neurotic episodes of flashback hallucinations and nervous breakdowns reminiscent to PTSD flareups where, among other symptoms, the body is put by the psyche on hyper-alert.

In a way, Phos’ new eyes are a twisted version of Bort’s eye set. Bort bears a similar set of narrow and sharp eyes that are reflective of their hyper-alert nature toward threats from the Lunarians.

Phos’ and Bort’s eyes also bear similarities to Alexandrite’s when Alexandrite (Alex for short) goes berserk against a Lunarian. Alex’s eyes contract dramatically as they train their eyes on a Lunarian, their hair also shifting color from a cool bluish-green to a fiery-violent red. The full details of Alex’s berserk mode is later suggested to be triggered based on both a combination of their gem physiology and their own traumatic experiences with the Lunarians. One of Alex’s dearest Lustrous friends was abducted and never seen again. Alex has since neurotically obsessed themselves with chronicling every episode and detail of Lunarian activity as their contribution to the Lustrous-Lunarian fight, and the mere direct sight of a Lunarian risks them losing control over themselves.

What’s ironic is that Phos’ new set of eyes bearing a striking resemblance to how eyes are depicted in various buddha figures. As aforementioned, buddha-eyes are associated with enlightened folk. Enlightenment entails an acquisition of knowledge, and Phos is many more times knowledgeable about the world at the end of the show than at the beginning. Phos is certainly less vain, less mischievous, and overall more mature than their previous self, the transformation in personality complementing their shedding of their previous wide and doey eyes for their new ones. But enlightenment also entails a coming to peaceful terms, and Phos’ is far from the picture of emotional stability and mental health. Antarcticite’s shattered specter still emotionally haunts Phos when they’re alone…

…and Phos has, at one point, been so mentally stricken by anything that reminds them vividly of their most acute trauma of seeing Antarcticite shattered and stolen that they nervously break down and lose control over their gold-platinum alloy. The alloy literally bursts out of their skin in floods during these episodes. 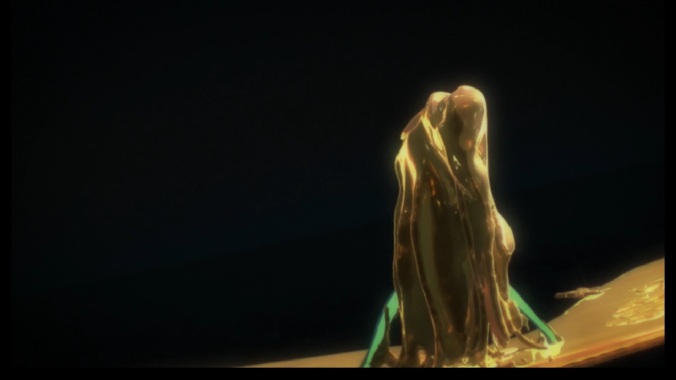 It could be argued that Phos is on the transitionary stage to obtaining inner peace in their current search for knowledge that, by all accounts, damages Phos’ original physiology and psychical health more than it actually helps. Suffering of the kind Phos is opening themselves to is antithetical to Buddhist aims, but there was a time too when the Buddha sought out suffering in the Buddhist mythos in his quest to  transcend it. It was a trial of error. The prince who would become the Buddha — after witnessing sickness, old age, and death —  abandoned his creature comforts and his claims to the throne and decided firstly to walk the path of the ascetic. The former prince would perform extreme austerities on himself, forgoing sustenance for long periods of time until he nearly starved himself to death. The former prince reflected on his ascetic lifestyle and concluded that he was no closer to enlightenment because of it than previously.

Phos’ quest for knowledge, for better understanding the Lunarians better as a means to avert the suffering being inflicted on their kind, somewhat parallels this first exercise of futility for the prince-turned-Buddha. However, the Buddha only attained that peculiar state in his eyes once he realized enlightenment and was no longer affected by suffering. Phos still suffers mightily and is arguably suffering worse than previously despite being juxtaposed to and being associated with Buddhist symbols of enlightenment — the lotus for one and the eyes for another. Additionally, enlightenment in Buddhism, it turns out, isn’t so much an achievement you work up to than it is a realization of what has always been in front of you. There’s recommendations in various Buddhist denominations about how to achieve the state of mind necessary to realize enlightenment, but enlightenment ultimately comes to the meditant instead of the other way around. 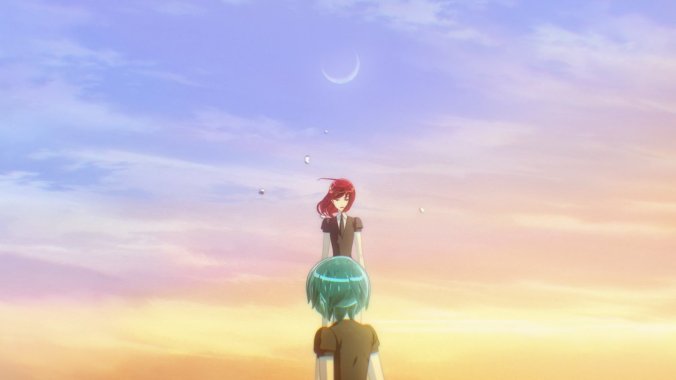 It’s not clear that Phos’ active quest for knowledge to save others is any way more helpful to everyone’s happiness than Cinnabar’s inactive desire for someone to save them is. Phos is taking initiative in their own way, and Cinnabar remains stuck to theirs, and they both still suffer. Both Phos by the end and Cinnabar from the beginning have always had narrow and sharp eyes, traumatic experiences under their belts, and a wealth of knowledge about the world’s harsh realities, but to claim either of them as enlightened in the Buddhist sense would be farcical to the Buddha’s example. They’re far from being stoic, placid, or content.

It’s as though these methods to averting suffering in the show are too extreme, and that the correct path to overcoming it is somewhere in the middle. I might be getting ahead of myself though.

Management: For more reading by yours truly on Land of the Lustrous, there’s this article where I delve more comprehensively on the Buddhist iconography of the show.

I also wrote an essay on neoteny, anime, and male otaku paraphilia, if you’re interested in reading more about it.

One thought on “Land of the Lustrous: Mine Eyes Have Seen Much”