Management: This essay is meant to be less of a review and more of analysis of the show being examined. It contains plot spoilers for the Golden Kamuy anime.

My undisputed favorite comfort meal to eat is Dinuguan. I remember falling in love with it back when I was little. It’s a Filipino delicacy, a savory stew made of garlic, vinegar, peppers, spices, pork bits, and… pig’s blood. I wasn’t aware that it was made with pig’s blood until my parents told me when I was much older. My reaction?  The news of it unfazed me. All that mattered was that it tasted good. I realize that that kind of reaction isn’t the norm for my friends and acquaintances. Many of them aren’t Asian or or particularly adventurous with what they eat. I’ve seen several of them balk at me while while I’m selling Dinuguan to them. Pig’s blood isn’t something that’s normally stocked in Western retail markets. It’s more commonly encountered in Asian grocery stores. Pig’s blood turns black when you cook it, and it coagulates into jelly when you leave it be. You typically find the stuff sold in portioned up cubes, in plastic tubs or shrink-wrapped packs . It’s kind of an inside joke among Filipinos to tease and trick the unbeknownst into trying it by calling it “chocolate soup.” Filipinos do have a recipe for something soupy with chocolate, but Dinuguan is most assuredly not soup with chocolate. It’s, again, pork stew made with pig’s blood.

Why does Filipino cooking incorporate pig’s blood in the first place? I don’t think that I’m knowledgeable enough to answer this question for certain, so a better follow-up inquiry might be: What makes the cuisines of some cultures more likely to use more parts of the pig than other cultures? My impression of American cooking is that it tends to dismiss pig’s blood as waste to be discarded. In contrast, my impression of Filipino cooking is that pig’s blood is valuable enough to be turned into a meal. That goes for the other peripheral parts of the pig like the ears, the neckbone, and the head. Filipinos subscribe to a “nose to tail” philosophy when it comes to turning livestock into a meal, and it seems like the Ainu have a similar “all parts of the animal” mindset when turning their game into something edible. To me, the reason for these similarities in cooking philosophy is connected to shared experiences of food scarcity. 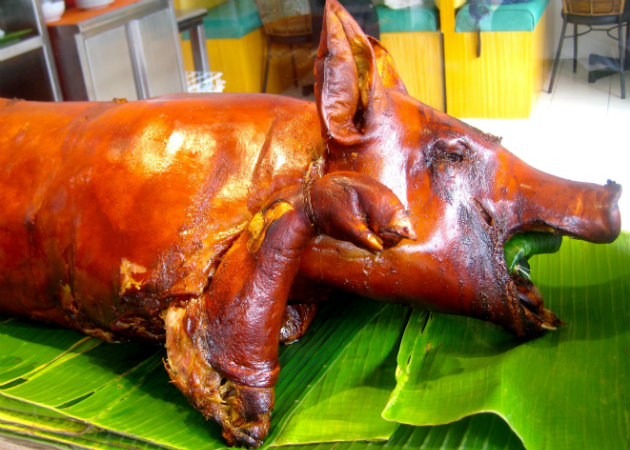 My folks ordered one of these for my high school graduation party.

I have the luxury of a father who knows how to butcher a whole pig. He knows how to prepare each part of the animal and turn it into something delicious . American birthdays are typically marked with cake and some candles. Celebrations in Filipino culture are customarily thrown with an order of whole roast pig. My Filipino father always volunteered to take the pig’s head at the end of these festivities when. He once told me about what his food situation when he was a kid. His family was working class, as was the socioeconomic status of the majority of Filipinos. His parents were always able to provide him and his brothers and sisters with enough to eat. However, his diet of rice and vegetables and fish would never consistently contain any meat.

Meat was expensive for my father’s parents, and he could only have his fill of meat on special occasions. Celebrations in the Philippines are marked with meat, with families or even entire villages slaughtering the pigs they’ve been specially saving. Meat was scarce and costly, and Filipino cooking likely developed around making the most of what meat was available. Ears could be served fried. Neckbones could be turned into broth or repurposed into crab feed. Blood could be made into sausages or stew. It’s through that lived experience of food scarcity that my Filipino father was taught how to butcher a pig whole. So that nothing could go to waste, he was taught how to prepare each part of the animal and turn it into something edible.

Asirpa of Golden Kamuy demonstrates, time and again, her prowess in hunting, catching, gathering, and cooking food. Hokkaido is a land of short mild summers and long harsh winters. While Ainu livelihoods have traditionally included farming in their list of food sources, the harsh elements that even affect growing seasons in Hokkaido can leave the land short of easily obtainable food. In response to the challenge posed by the harsh elements of Hokkaido, Ainu cooking likely also developed around making the most of what could be prepared to eat. Golden Kamuy frames moments of Asirpa preparing squirrels and other small animals she catches into meals as both comedic gag and anthropological insight. The way food is prepared and shared in a culture communicates knowledge about what that culture as like, and Ainu culture is no exception.

When it comes to preparing squirrels and other small animals into meals, Asirpa is shown in Golden Kamuy as making the most efficient use of the animal. She offers the brain to her companion Saichi Sugimoto and then proceeds to turn the rest of the meat into something called citacap. Meaning literally “we mince” in the Ainu language, Asirpa starts mincing the squirrel before handing the knife over to Sugimoto to finish the job. Squirrel meat is tough and hard to pry from the small animal’s bones. To make the most of the meat while expending the least amount of energy to do so — food is scarcer in winter, after all — the Ainu cook minces the meat into a tender paste, mixes the meat-paste with locally foraged spices, and typically serves the citacap raw. Out of consideration to the non-Ainu Sugimoto, the Ainu Asirpa turns the meat-paste into meatballs and cooks it in a ohaw soup with locally foraged mushrooms and vegetables.

As the translation of “we mince” and Asirpa and Sugimoto demonstrates, citatap is a dish whose contents and preparation is indicative of both a people’s geography and values. Preparing citacap not conserves the strength of the immediate persons involved by having those persons share the preparatory effort before one gets too tired. It also imparts important values that the Ainu need to pass down to other members of its community. A group of people living in a frigidly hostile clime like Hokkaido survive better if they cooperated together. Codifying the advantages gained through cooperation into a community’s culture ensures that practical measures of survival are reinforced into treasured values that can be easily reproduced in successive generations. Values reproduced and reinforced through even seemingly mundane practices such as making food (i.e. preparing citacap) both increases the odds of survival for group of people and creates an identity for a community of folks to rally around.

I love Dinuguan, and I love that it tells a story about my Filipino ethnicity. I’m figuratively and literally taking in the story of my people as I sit down to chomp on some cooked pig’s blood stew. Golden Kamuy does similar with Asirpa’s Ainu ethnicity whenever it slows down the plot and tells the audience how to make citacap and other Ainu delicacies.

How about you? Do your favorite foods have a good story behind them? Let me know in the comments!