Management: This essay is meant to be less of a review and more of analysis of the show being examined. It contains plot spoilers for the Dororo anime, specifically Episode 7’s “The Story of the Jorogumo Silk Spider.”

If I’m not already on the public record for this, I guess I’ll make it here: I like Spider Girls. I like Spider Girls a lot, and I don’t mean the Marvel variety. I mean the monster-kind: half-carapace and arachnid appendages, top hair and human flesh. Hell, I wrote a fan fic about Spider Girls and Dark Souls once, but never mind that. I like Spider Girls for reasons other than the suggestive ones you’d might suspect. I like them for ways that set them apart from the other popular monster girls.

I like Spider Girls for their baggage. People fear spiders, after all. People loathe them. They see the multiple eyes, multitude legs, mandibles, cuticles. They see spiders and other features related to them, and their foremost instincts to them, their gut reactions to the critters, are to jerk away immediately or smash them into paste. People will recoil or lash out at spiders, their fight-and-flight mechanisms on the fritz, even if they’re non-venomous or really quite harmless. I don’t necessarily blame folks for doing that. It’d be hypocritical if I did. I’m guilty of one and the other, many times over, paths less frequently tread, blood on my shoes’ soles. 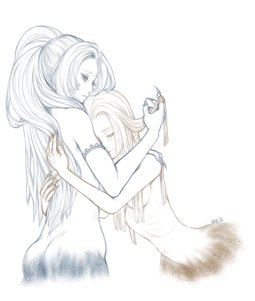 That terror and fury isn’t an unusual condition of the mind, because your brain rationalizes it as being better safe than sorry. People aren’t born with discriminating eyes, after all. They need to be trained on the details. They need to be taught what means danger. In the light of this perspective, phobias are shortcuts — they have their uses. Yet even then, it’s not as though the more dangerous spiders mean anything spiteful or cruel when they bite you or brush up against you or find themselves in their way. Everyone finds themselves in the wrong place and time. No one really knows any better when first contact is made.

Buddhism builds on this empathetic logic to approaching life. From the strongest human to the smallest spider, every life is subject to the cycle of samsara, or reincarnation. Every entity is subject to the pain of existence. Every existence is a precious thing. Life reincarnates into higher or lower forms of existence when they die. A spider may have once been human, and a human may yet arise from a spider. In the light of this perspective, Buddhism asks us to have pity and compassion for living things, regardless of their past misdeeds or current station. Buddhism is a deeply ingrained in Japanese culture, and spider encounters are a common Japanese experience. It’s no surprise then the country is home to all kinds of tales combining spiders with Buddhism, from a Ryunosuke Akutagawa short story to a Spider Girl in Dororo.

END_OF_DOCUMENT_TOKEN_TO_BE_REPLACED

Management: This essay is meant to be less of a review and more of analysis of the show being examined. It contains plot spoilers for the Mob Psycho 100 anime, especially Season 2’s Episodes 3-5.

I don’t use social media as much as I used to, and in some ways, my decision to step back has improved my stress levels. It was around maybe the beginning of college when I created a Twitter account. I was looking for sharp and animated discussion on the anime I liked. I was also looking for an easier way to keep up with political news. I’m a political scientist, after all, and I’m also an anime fan. I followed a lot of anime critics. I turned my social media feed into a news aggregator. The two spheres of Twitter that I joined ended up overlapping each other in key areas. I found myself among  politically conscious anime fans, and at the beginning, I enjoyed being a part of that community. I owe my outlook towards art and life to those critics, to minds who stressed how both areas intersected with the other. They were also silly and fun, and I felt that I could let loose with them. I’ve made some great friends during those dog days of college.

The dogs were let lie and eventually put down, and my relationship with social media changed for the worse. Change marches onward regardless of our wants, and people are angrier than before. Laying alone in bed with nothing but a Twitter app, I could feel myself slipping into misanthropy. I’ve been cynical about things for as long as I could remember. I’ve always known articles to prioritize scandalous and sensational headlines. In many respects, it’s a great thing that people are more critical and skeptical about the status quo. But in remaining hooked to social media IVs in its new tenor– its drip-feed medley of terrible news and violent rhetoric — I could feel my mind wasting . My body felt heavy with the futility of existence, possessed by entities whose names in legion mean The World. I noticed it crouched over my shoulders, and I felt its weight with my own.

What with my tendency to look at events from a macro-scale (studying history does that to you), I began to see every moment of living as this tragic microcosm in the larger story of human suffering: cyclic, ceaseless, immutable, inevitable. “Bad People are a mistake,” my motto began, and then I started cutting out the “.” But then I started distancing myself from the larger Twitter discourses. My headspace started clearing like god rays breaking through clouds. My career as a cloistered student is past, the me of present now teaching English to kids. There’s a joy in watching mouths gasp in understanding, in seeing eyes sparkle while tiny arms clutch black-dyed jeans during “Black!” Color Touch. There’s a sanity in working with people who know the struggles of managing children, with colleagues who want to small talk with you and invite you to their outings. The morning sun began feeling crisp everytime I stepped outside, and the mountain trees that greeted me on every drive started glowing warmly with color. 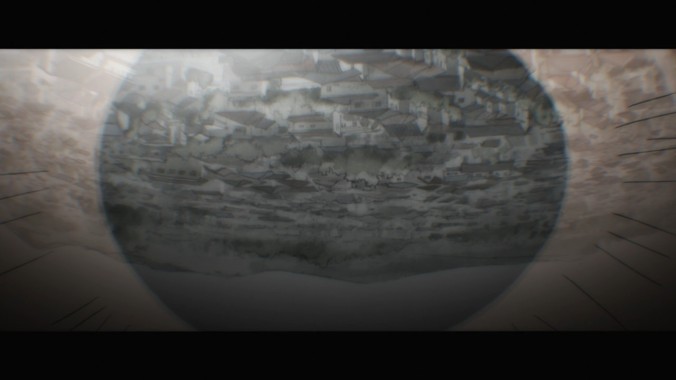 What happens to a person when he gets stuck in headspace like that for too long? How does a person get out of it? I had a choice to cut back on Twitter. Mob doesn’t when a villain traps him in a negative headspace. The villain is determined to to turn him into a raging misanthrope, and like Joker and Gordon of Batman fame, he attempts this by trapping him in an nigh-real simulation of his perspective. It lasts six months.