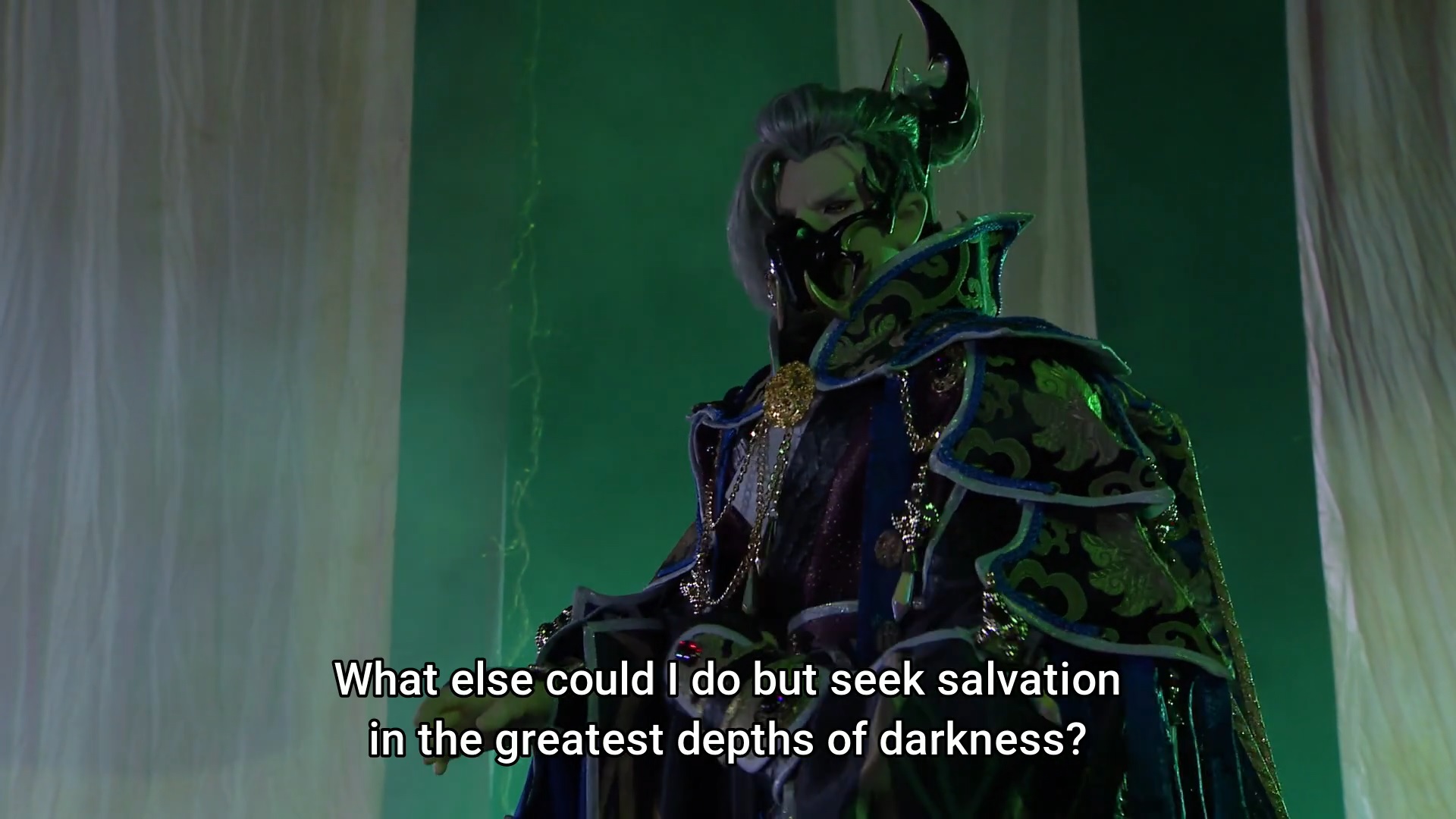 Non-management: “Urobutcher” is a name that’s stuck onto Gen Urobuchi, for better or worse. One of his earliest camps of detractors accuse Urobuchi of torturing idealistic hero characters for the shock of it. One of the latest camps accuse Urobuchi of not torturing idealistic hero characters enough and becoming soft. Urobuchi’s gratuitous use of death and gore isn’t beyond criticism, and he has mentioned more recently that he’s getting used to writing less darkly. The breaking and butchering in Urobuchi works does have context though. The death and darkness serves a larger point in Urobuchi stories. Much as it might otherwise appear on the surface because of how willing he is to push characters into the meat grinder, these violent and macabre elements never exist for their own sake. They exist in his stories as an extension of Urobuchi’s own personal ideals for goodness dashed against the hard rocks of reality — of heroic individuals trying to live and lead in a world that that he sees as objectively indifferent and cruel. And for certain, if you too read up on the daily news, you’ll realize that lot of —-ed up stuff happens daily.

Urobuchi admires heroes who strive to make this cruel and indifferent world a better place, or at least he wants to believe in them. However, Urobuchi has also spent a lot of thought about how the world’s cruelty and indifference would affect heroes in turn. It’s not a one-way street for Urobuchi. The world is hard to bend. In Fate/Zero, Psycho-Pass, and Madoka Magica, heroes are broken and misguided by the world, become corrupted and warped by reality, are traumatized, have to compromise, and prevail against the universe only by the grace of a God damn miracle (but not before having to witness multiple other heroes getting —-ed up). So many of Urobuchi’s hero protagonists start idealistic before bashing them against the world, and as they endure their brutal trials, there’s a sense that Urobuchi himself really admires their idealistic battles, whether they totally succeed or ultimately fail. He admires their struggles so much that he’s written about them repeatedly, in many versions and different genres up to wuxia. The struggle for kindness and compassion is just as universal to Urobuchi as the indifferent and cruel nature of the cosmos.

So we come to Urobuchi’s most recent Thunderbolt Fantasy and Shāng Bù Huàn, who I think is Urobuchi’s best example of a well-rounded heroic idealist. The universe of Thunderbolt Fantasy is dark and can be brutal, but it does seems to treat Shāng less brutally despite totally being a protagonist with heroic ideals. If Urobuchi’s not butchering heroes for its own sake, then why does he spare Shāng from the usual gauntlet of brutal trials? I’d argue that it’s not oversight or contrivance, but reflection of Shāng’s maturity relative to his idealistic peers. Shāng is a kind, compassionate adult who’s well-aware of how the terrible the world and people can be. He doesn’t compromise with committing evil and accepts he may have to face tremendous personal sacrifice and loss one day. He stays the course of his idealism despite being challenged on it by his enemies and allies, because he’s thought long and hard about it already. Taking it from that perspective, even if not as brutal in content as his other works, Thunderbolt Fantasy is not so different from the stories Urobuchi has written before about heroes.

Anyway, I’d like to give a big thanks to ANN’s Lynzee Loveridge for commissioning my article. Below is a summary short of the article. If you’re interested in reading further, click the link embedded in the title or at the end of the article sample:

Urobuchi, History, and the Wuxia Hero of Thunderbolt Fantasy 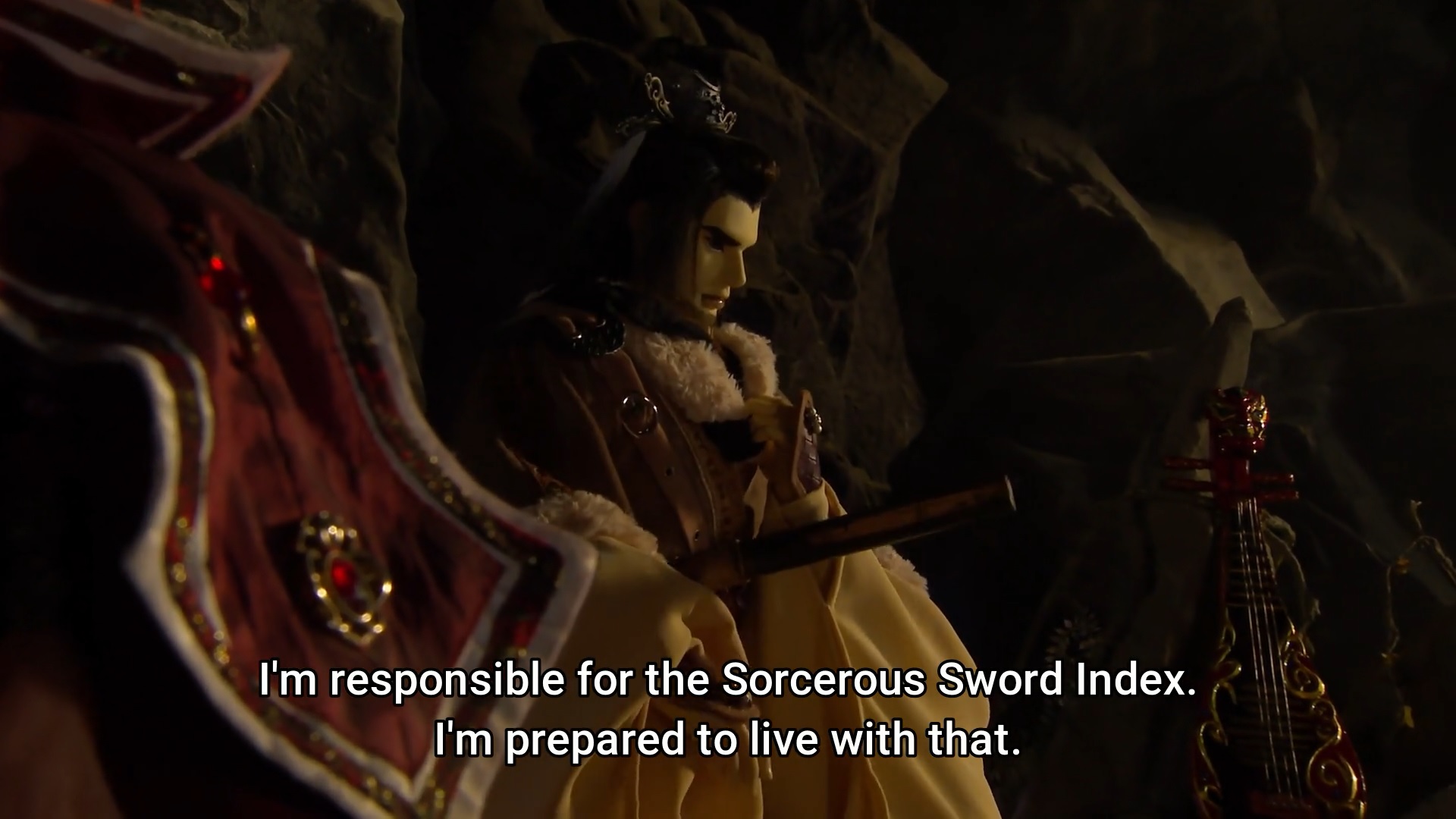 Across genres, properties, and mediums, intersecting so many of Urobuchi stories is an oppressive and penetrating darkness. Gen Urobuchi often includes themes of dystopia, indifference, and cruelty into his stories, setting them against his characters’ innocence, hopefulness, and righteousness. He was notorious for breaking or corrupting his creations in his initial works, though he’s more recently allowed his creatures some compromise and even triumph — albeit, mind you, still requiring the requisite pounds of flesh. In the genres he’s molded animate clay, Urobuchi tends to pick character-types to cast life into as his protagonists, archetypal characters that have two things in common: they are (1) idealists and (2) outsiders. He has a potential recruit in magical girl Madoka Magica; a lonely king in Fate/Zero; a newbie detective in hard-boiled Psycho-Pass; and Shāng Bù Huàn, the wuxia hero of Thunderbolt Fantasy. So how does Urobuchi apply his signature darkness on Thunderbolt Fantasy and the wuxia genre?

But first… what’s wuxia? Wuxia is a genre of Chinese storytelling centered around individuals wandering about, aiding the weak using their martial arts. These “wuxia heroes” bear similarities to the knights-errant of chivalric European tales, the golden-hearted cowboys of American Westerns, and the principled samurai-ronin of Japanese chanbara. The wuxia hero dates back to figures in history who lived long before the wuxia genre was formalized… READ MORE 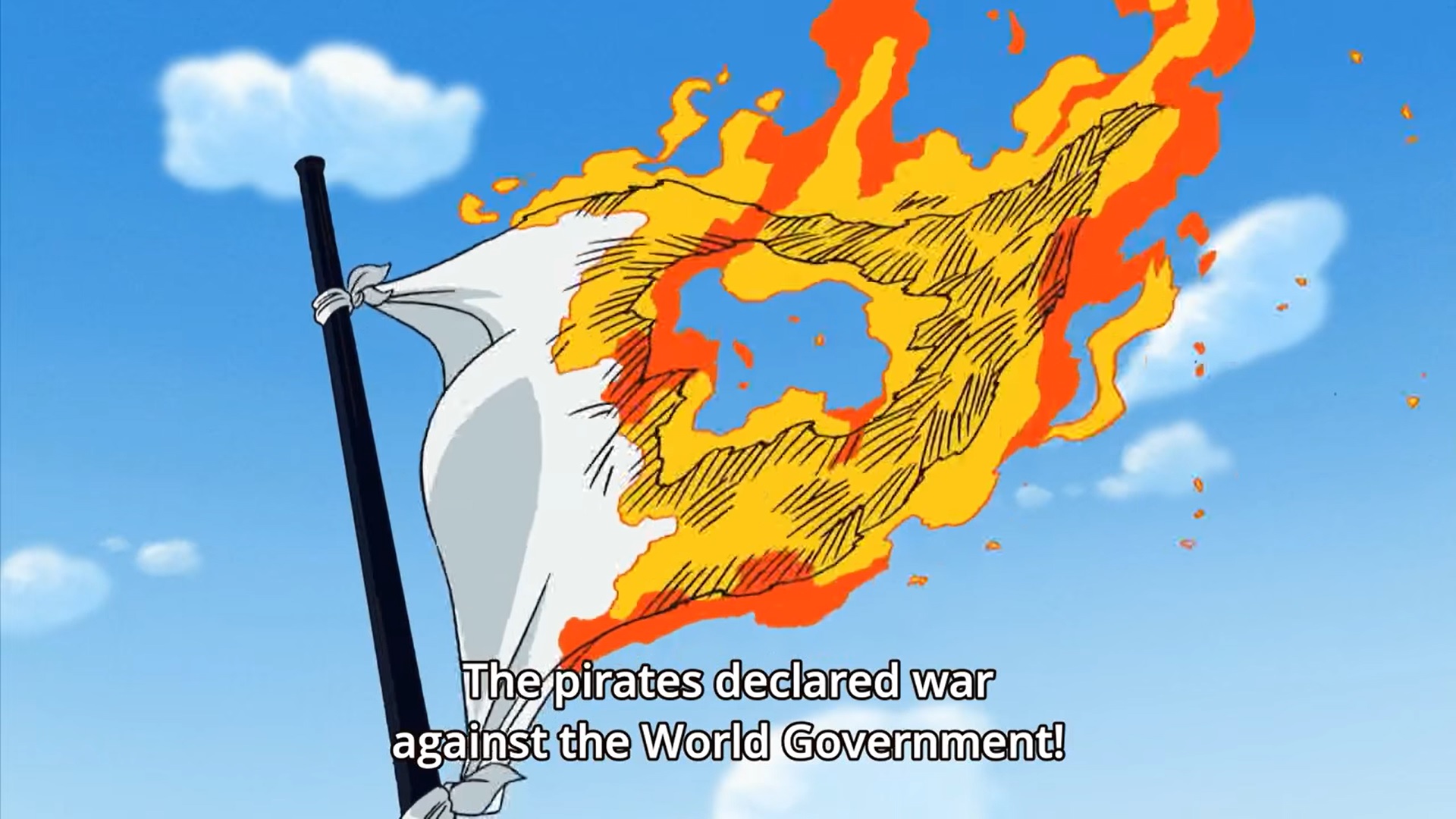 Non-management: So I really did, at first, wonder why pirates were such a beloved icon in American culture. Small kids have traditionally dressed up as pirates for Halloween without issue, and a lot of mainstream media present pirates as heroes to root for — children’s media included. It sort of felt like a white-washing of heinous pirate behavior to make them out as romantically heroic figures, and to an extent I still think that’s true. Not unlike other brigand groups and criminal syndicates, many pirates undoubtedly ruined many innocent lives raping, plundering, sacking, and burning, all for their own profit and often no one else’s. With just this shitty context, one can draw comparisons between pirates and how American culture has problematically romanticized the Italian mafia. Albeit, upon further reflection, the best mob media doesn’t really excuse all the murder and cruelty so much as they glamorize the pagentry and tragedy.

The Italian mafia was, at least initially, a place that attracted young ambitious Italian American men. With no easy way to climb up the socioeconomic ladder in Italian and Catholic-unfriendly American society, unemployed Italian men-turned-mobsters could earn their sought after wealth and status. They could finally live out that American Dream, a warped and twisted version of it, but one that earned some respect and was flush with cash.

Likewise, upon further inspection, piracy as a whole is a lot more complicated than its infamy as brutal sea banditry would suggest. Becoming a pirate may might have been a choice for many, but that choice was made easier by the harsh world that these had to pirates live in, one of unjust governments and unfair systems that made more honest options of making a living difficult if not impossible. So their freedom-singing reputation stems, not just as an extension of pure self-absorption (since the most successful pirates regarded their colleagues quite well and equitably for the times), but also as a transgressive call-out of defiance against the higher powers that helped make them that way. Modern Internet piracy is regarded in much the same way by its sympathetics and partisans, a transgressive defiance against unfair copyright regimes.

The pirate protagonists of One Piece too make a transgressive stand against the unjust World Government when it attempts to strip their friends’ freedom. Rather meekly submit and get beaten down by the system, Luffy and his crew picks fights with and declares war on it. For folks who love freedom and hate injustice, those acts of defiance are what make pirates relatable and admirable enough to rationalize good pirate media and pirate cosplay.

Anyway, I’d like to give a big thanks to ANN’s Lynzee Loveridge for commissioning my article. Below is a summary short of the article. If you’re interested in reading further, click the link embedded in the title or at the end of the article sample:

Through One Piece, the Golden Age of Piracy Lives On 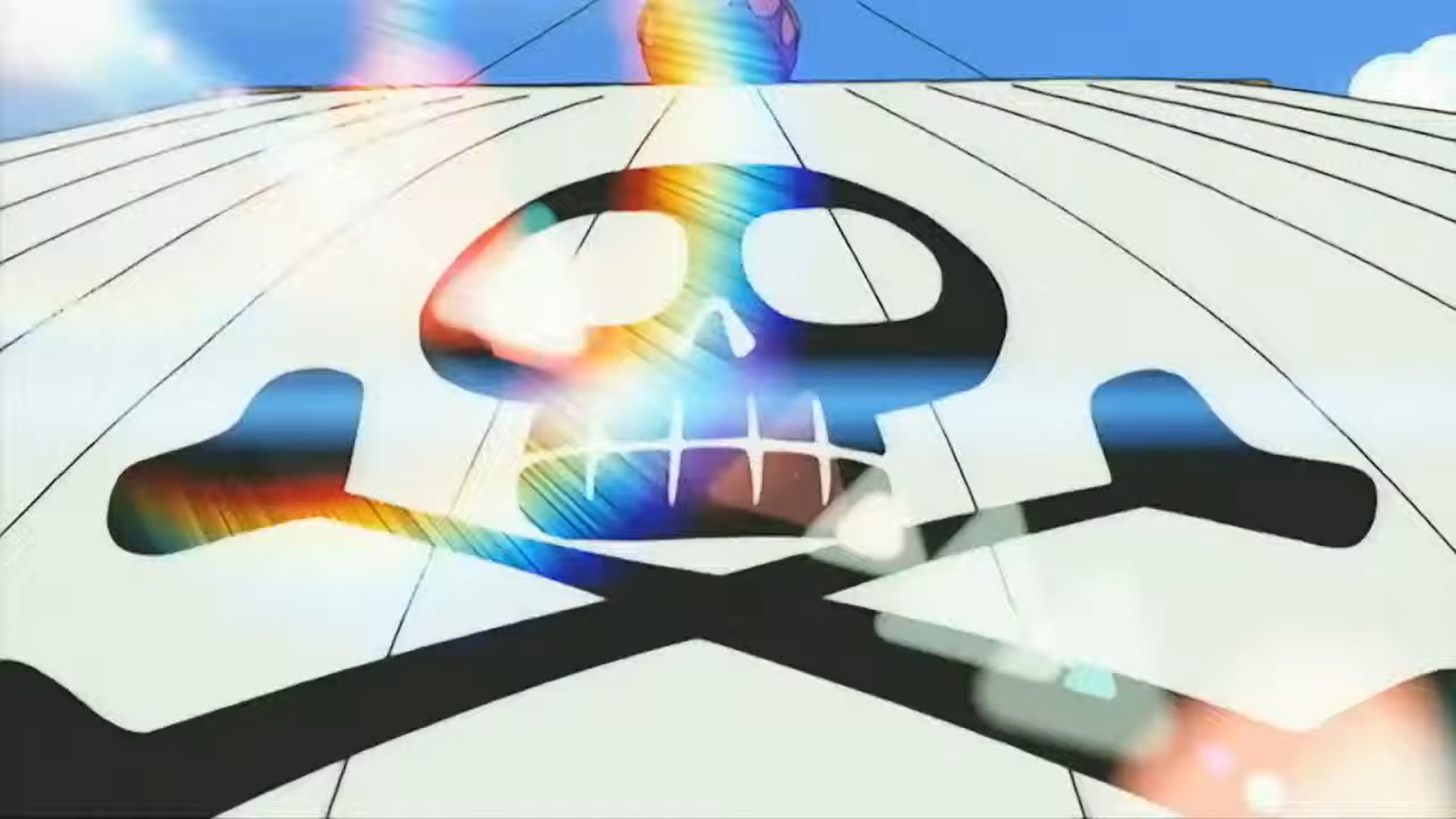 Even to the present day, views on piracy have tended towards two sides. On one side, pirates are, by virtue of their criminal maritime activities, regarded as bandits, brutes, and thugs of the seas, raiding civilians on the ocean and shore, robbing innocents of their lots and lives. On the other, pirates are almost endlessly romanticized: literary classics like Treasure Island feature pirate protagonists, kids dress up in crossbones-skull eye-patches and tricorn caps for Halloween, numerous sports teams lift their namesakes from “pirate” or related terms, a couple of Disney’s most iconic media franchises and amusement attractions are pirate-themed, and a certain VTuber from Hololive with more than a million subscribers uses a pirate avatar. Finally, the bestselling manga series of all time is about a young man who wants to become the Pirate King; more so than ninja or reapers from millennia past, it is One Piece and its tale of pirate romanticism that stands tall atop the shounen manga summit.

While the creative artistry and storytelling chops of Eiichiro Oda is one reason that made One Piece such a beloved series, another significant factor is the modern appetite and affection for pirates. What’s with this fascination with and even adoration for pirates, and what does it have to do with the acclaim and popularity of One Piece? To answer that, we first need to look at the oftentimes incongruous historical portrayal of pirates, who are simultaneously splotches of scum threatening the maritime order and members of a resistance rebelling against an unjust system. It is this history One Piece reflects, and one that we shall investigate… READ MORE