Management: This essay is meant to be less of a review and more of analysis of the show being examined. It contains plot spoilers for the Demon Slayer anime.

In case anyone would like to read it from there, a version of this article was also published on ANN. 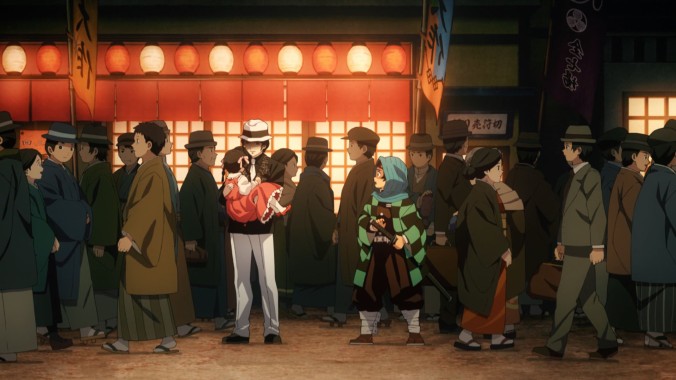 What’s the first image that pops into your mind about Japan? When people bring up their ideas of Japanese aesthetic, their minds probably gravitate to two images. For Japanophiles and history buffs, they might think something “traditional:” homes of cedar or clay-tile roofing, opaque paper sliding doors, eave-sheltered porches of wood surrounded by serene, immaculate, miniature displays of nature. For futurist aficionados and cyberpunk doomsayers, they might think something Ghost-in-the-Shell: vistas of tall glass and steel, towers into the nighttime skyline, darkness displaced vaguely by multi-colored hues of strobe and neon. The first image hearkens to a period in Japan “untouched” by the influences of the outside world. The second image conjures a picture of Japan “consumed” by it. Regardless of how totally accurate these images are, they’re probably the two most people gravitate to when thinking about Japan…

…except there’s a third image that’s also memorable to many Japanese. It’s a moment of transition in Japanese history, the traditional aesthetic of Edo Japan intersecting with the imported aesthetic of the West unleashed during Meiji. Kimono and business suits, obi wraps and hats, men and boys, women and girls amble the sumptuous Western-inspired streets of day-lit Ginza or the sultry electric-lit thoroughfares of nightlife Asakusa in traditional, Western, and syncretic (traditional-and-Western mixed) fashion. It’s this fashionable third of transitory excitement that Demon Slayer manages to capture pretty well. Let’s explore some of that mixed fashion and discuss how urbanites in Japan fell in love with it, historically.

END_OF_DOCUMENT_TOKEN_TO_BE_REPLACED

Management: This essay is meant to be less of a review and more of analysis of the show being examined. It contains plot spoilers for the Miss Kobayashi’s Dragon Maid anime, especially Episode 9. 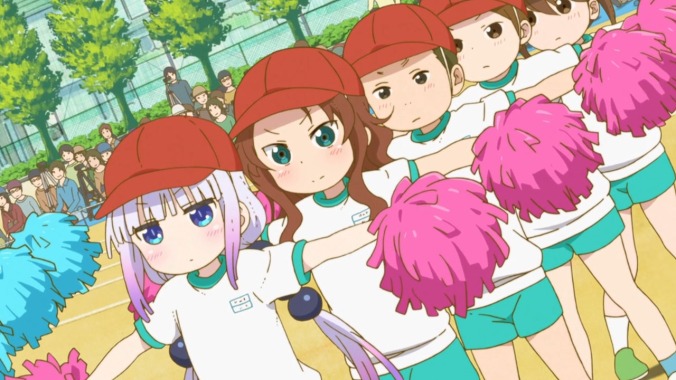 For a mightily questionable premise of “the adventures of a bespectacled Victorian maid-obsessed salarywoman and the busty live-in dragonoid maid that wants to lovey-dovey to quite-erotic things with her”, Kyoto Animation’s anime adaptation of the manga series is surprisingly thoughtful. Now… I wouldn’t call it entirely wholesome.  The adaptation doesn’t completely excise all its questionably horny gags: a dragon woman’s lack of boundary respect for a middle school boy, a middle school girl’s less-than-prurient feelings for dragon girl classmate. Miss Kobayashi’s Dragon Maid (henceforth just Dragon Maid) is nevertheless thoughtful where it talks about family and community. Rather than their dynamic being solely defined by comedy that exploits their bizarre situation, Kobayashi and Tohru’s queer relationship is nurtured numerous moments of appreciation and intimacy. By the end of the first season, a Kobayashi that invited Tohru in during a drunken stupor has become a Kobayashi that she misses her dearly while fully sober: not just because Tohru’s the maid she’s always wanted (she’s not Victorian), but because she feels rent without Tohru in her life.

Much like how Kobayashi, Tohru, and later Kanna eventually live together under the same roof as strangers-turned-family, Japanese society reproduces and reinforces familial and communal values in the people that comprise it. Kobayashi begins the show as nerdy workaholic loner, not necessarily opposed to socializing, but mainly focused on personal interests: day job and maid hobbies (the real Victorian shit). By the end of the show, Kobayashi lives in a family sized apartment with Tohru, spending money and making time for Kanna’s school supplies and functions. 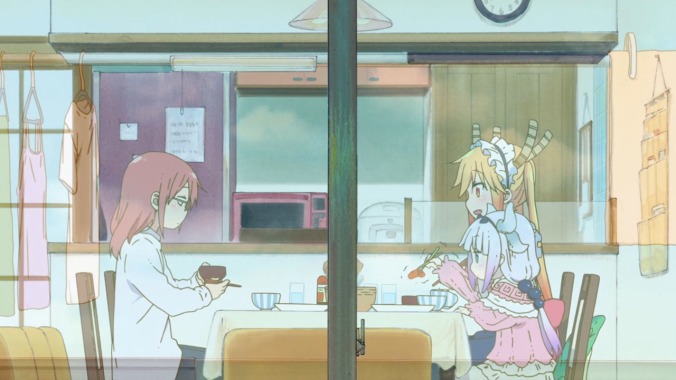 From the family side of things, her atypical depiction in anime and Japanese media in general as a rather unfeminine looking-computer programming-salaryperson slaving-maid otaku raving-ultimately queer woman doesn’t prevent her from forming a happy family complete with a child. Japanese society promotes making families for the sake of raising children for Japan’s future. Dragon Maid deviates but doesn’t fully depart from that goal. If you can be open-minded about her lesbian relationship with a rather motherly Tohru and the non-blooded connection to her still effective daughter Kanna, Kobayashi’s character slots rather snugly in that customary role of father. Kobayashi is the stoic tie-and-slacks breadwinner.

From the community side of things, Kobayashi’s desire to provide for Tohru and Kanna, make them happy, and keep her world welcoming to them puts her into situations that require her to engage with society more broadly than she previously had. Nothing better illustrates this change in Kobayashi more than Sports Day. But… what is Sports Day exactly? What’s so special about it? As a person currently in Japan teaching kids there for a living, I’ve had the opportunity to spectate and even participate in Sports Days. I studied the games and activities whilst cheering for my students. Somewhere, I realized a educative purpose to it all that doesn’t have to do with athletic fitness.

END_OF_DOCUMENT_TOKEN_TO_BE_REPLACED

Management: This essay is meant to be less of a review and more of analysis of the show being examined. It contains plot spoilers for the Your Name anime. 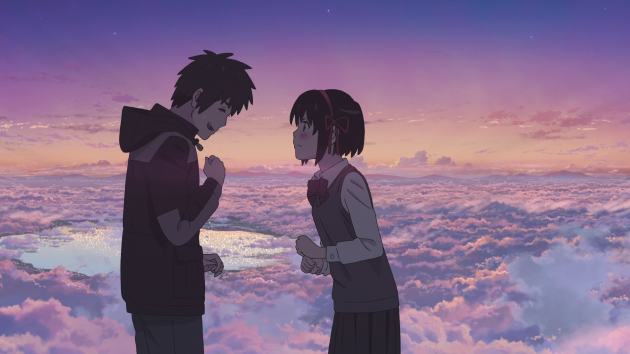 We’re acquainted with these tales of from folklore and myth, the premises of horror stories, those testimonials people caught on special TV channels: a place of some awful significance is haunted by undead spirits. Moldering graveyards, abandoned asylums, scarred battlefields, places of disaster… In the fields of Gettysburg, for example, some locals claim that they can hear the dead, soldiers from long ago who haunt the former battlefield. Gettysburg was the location of the American Civil War’s bloodiest battle, and its legacy as the site of mass slaughter has made the more superstitious perceive it as a site of restless energy. In the popular imagination, these places serve as liminal spaces, locations and sites where all-too-natural dichotomies are not normally observed: death intermingling with life, life intermingling with death. The dead have not passed into the afterlife, the ether, or permanent rest as they ought to have. Instead, their undead spirits wander the grounds, bound to some place of awful significance.

While Your Name is not a horror film in the way the genre is conventionally understood, the narrative of Your Name plays an awful lot with liminal spaces. The concept of liminality in religious and anthropological studies has a definition that’s a little broader than just the spaces the mortal and the infinite occupy. Liminality is the concept referring to transformation and intersection, where clearly delineated dichotomies of “one” blur and bleed into the “other,” branching into or becoming new and distinct entities. Life and death is the domain of liminality, but so is the profane and the sacred; the child and the adult, the individual and the communal, this direction and that, this person and that, and even time and space itself. Directed by Makoto Shinkai, Your Name is a story layered with examples of its characters passing through various thresholds, states, and spaces of liminality to resolve a conflict. The film starts with the blurring of one traditional dichotomy: the inexplicable bleeding of its two protagonists into each others’ lives, a body-swap. Midway, the film grounds its supernatural gimmick with its extant reason: a place of disaster.

END_OF_DOCUMENT_TOKEN_TO_BE_REPLACED

Management: This essay is meant to be less of a review and more of analysis of the show being examined. It contains plot spoilers for the Angolmois anime. 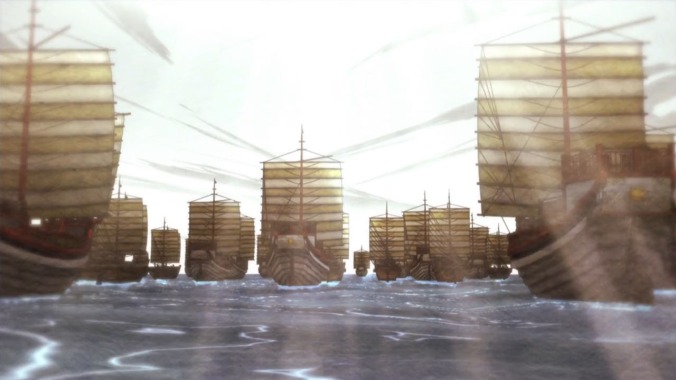 Under the leadership of Genghis Khan, the destiny of the Mongol people was transformed. From the squabbling horse tribes of the steppe, they were now the mounted conquerors of empire. Unified as a people, the Mongols challenged the august authority of the Celestial Empire: China. They took that authority for themselves, tearing the stars from their skies, crushing Chinese resistance in the north and declaring themselves China’s new rulers. The grandson of Genghis Khan and the third leader of the unified Mongol horde, Kublai Khan turned his conqueror’s appetite toward the Land of the Rising Sun and ordered the first of two Mongol invasions of Japan.

It is in this historical backdrop that Angolmois: Record of Mongol Invasion finds its setting and conflict: Tsushima, 1274 – the first frontline of the first invasion of Japan by the Mongols. Kuchii Jinzaburo and a band of exiles – a fellowship of petty scoundrels and disgraced warriors – find themselves ferried out of death row and shipped into a battlefield. There, those among them willing to fight alongside Tsushima’s defenders make their own contributions to this drama of bloodshed and sacrifice that, judging by the history, will amount to little more than a delaying action for the Mongols’ ultimate goal: the Japanese mainland.

But how did it come to this? How do the events from the history inform this animated fiction?

END_OF_DOCUMENT_TOKEN_TO_BE_REPLACED

Management: This essay is meant to be less of a review and more of analysis of the show being examined. It contains plot spoilers for the A Place Farther than the Universe anime. 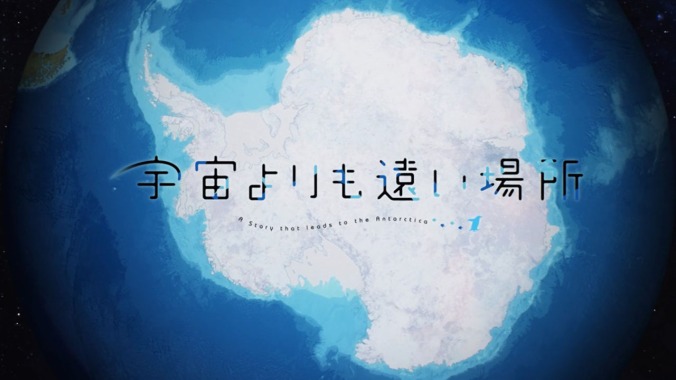 There’s a lot to A Place Farther than the Universe that even a cynical guy like me can relate to. It’s a story of earnestness governed by doubts that I’d imagine speak to many folks. Mari “Kimari” Tamaki’s personality might have been too earnest for me to consider her my character favorite, but as the initial main girl introduced to the audience, her central conflict was something that hit home. You may have big dreams early on. You may have achieved little since then to realize your aspirations. You get intimidated after realizing the scale of the work and luck needed to accomplish your goals. You fall into a deep melancholy over being no where close to your aims. What was the point of everything until now? That was me in my 20s, with hair on my chin and honors to my degree, working a job for a year that wasn’t worth the time and tuition I spent for schooling. I’m still in my 20s, and I can confidently say that I’m in a better place now.

But I’ll admit, the recent memory of a year of my youth wasted still bothers me. In that spirit, I understand why folks combine new resolutions with dramatic gestures. People do it often at the turn of the New Year, promising on its midnight stroke to becoming better people no matter what. If you think about it, why it has to be on New Year’s Day is a decision people make that’s ultimately arbitrary. It would be more logical for folks to devote themselves to new resolutions as soon as they form them. However, it is romantic to follow through commitments when they’re associated with some grand spectacle. People convince themselves that a dramatic gesture will make it harder to break a promise. It gives them an extra boost of courage, or it puts extra pressure on them to save face. For Kimari, Shirase Kobuchizawa, and her other friends, her life-changing adventure was a trip to Antarctica. For me, my call to adventure was going to Japan.