Management: Some of the early fruits (part of an annotated bibliography) of an anthropological research paper I’m working on connecting Aum Shinrikyo, the Japanese psyche, the 1995 Tokyo Sarin Gas Attacks, and cult tropes in anime post-Aum. I’ve honestly been busy to the point that I’ve only managed to come up with one of my more usual complete and lengthy pieces for next week, and I feel bad for not updated the blog for so long. Hopefully this slapdash analysis will soothe those disgruntled until then.

The full essay is here. Check it out.

What may be regarded by society as religious “cults” have permeated history from ancient and modern times, with their latest widely accepted mass incarnation in modern times emerging in its latest wave in the 1980s and 1990s with the rise of globalization and Western values of individualism, materialism, and secularism. In response to a world increasingly tied together through markets of economics and ideas, culturally closed and colonially bitten portions of society, rather than accommodating and resigning themselves to what they see as the imposition of moral and spiritual depravity, have produced new age religious movements attempting to cater to the socially disaffected. Born out of a highly materialistic, highly competitive, and highly oppressive (so they say) Japanese culture within the context of other existing and soon-to-exist new religions throughout the world was Aum Shinrikyo.

With the 1995 Tokyo Sarin Gas Attacks and other acts of violence and deviancy, Aum Shinrikyo would leave an indelible scar in the Japanese psyche that, to this day, permeates in popular Japanese culture and even anime subculture as negatively connotative “evil cult” tropes. Some anime embrace them, others make light of them, others still challenge them, and others utilize them in all three ways. Some recurring themes to keep in mind as you scan down the following seven, alphabetically ordered shows that feature some use of this trope: 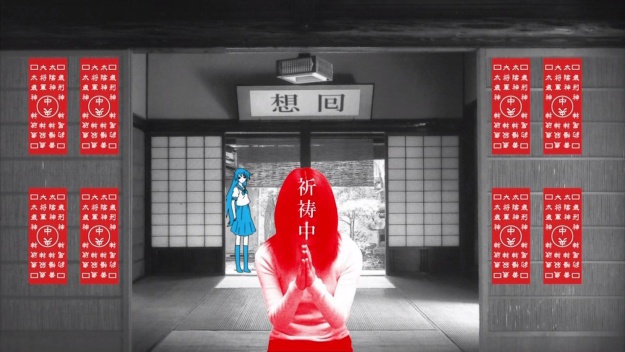 Based on an in-universe mythology of supernatural oddities, a half-vampire teenage boy attempts to aid the girls afflicted by these oddities. Collectively dubbed “Hitagi Crab,” Episodes 1 and 2 feature the case of a girl possessed by a weight crab deity. In a moment of vulnerability, the girl’s mother fell under the influence of a religious cult. The head of the cult attempted to rape the girl while the girl’s mother stood by. In her moment of vulnerability, the girl inadvertently wished the weight of the incident’s trauma away by the crab deity. In wishing away her trauma, she loses most of her physical weight and denies her loving association with her mother. Distraught by the denial of her mother, the girl and the boy attempt to regain her lost physical and emotional weight. 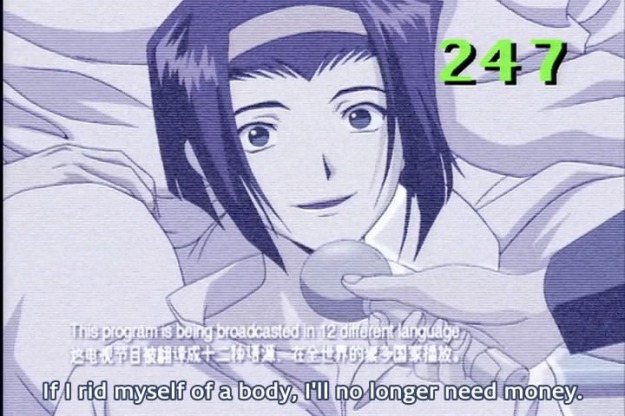 Set in the distant future – where interplanetary travel and settlement within the Milky Way is feasible and planetary societies and the space between are amok with significant degrees of lawlessness, the show follows the drama of a group of bounty hunters as they drift by from one posted bounty to the other. Episode 23, “Brain Scratch,” has the bounty hunters haphazardly try to collect the head of a religious cult called SCRATCH. Also known as the electronic migration movement, the cult preaches salvation from the corrupting impurities of human societies and human bodies by the migration of the spirit through the conversion of brave waves into electronic data. While more alluding to Heaven’s Gate than Aum Shinrikyo, SCRATCH features parallels to Aum through coverage of the group by the mainstream news media and use of a SCRATCH-made device similar to Aum’s Personal Salvation Initiation (PSI) units.

Expanding on a scenario giving a young adolescent man conditional power over the lives of others through the use of a Death Note, the handsome, charismatic, intelligent main character of the show attempts to establish, arbitrate, and execute a stable totalitarian order based on the whole-sale slaughter of existing criminals and the whole-sale deterrence of would-be criminals from afar. While never divulging his personal identity to the public, his extrajudicial killings produces the popular culture image of Killer, or Kira. Mystified and deified by scores of people who approve of his extrajudicial killings, his Kira cult of personality generates populist support that bears the trappings of fundamental faith and ceremonial ritual consistent with that of religious cults. 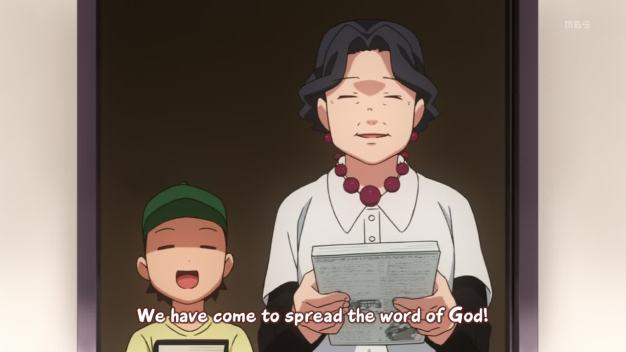 Arranged within a series of traditional Japanese rakugo satirical stand-up skits, the show features the recurring the cult trope of sensational and avaricious religious proselytizers who consistently show up to sway the rakugo comedy girls into joining their faith, marketing transaction-organized services of salvation and exorcisms. The comedy skits involve cult members trying to recruit rich people, cult members getting scared witless when confronted with an actual demonic possession, cult members interrupting song sequences with prayers/sutras/jingles, a cult member getting socked in the face, and a cult member assassinating the particular rakugo comedy girl responsible for socking said cult member in the face. 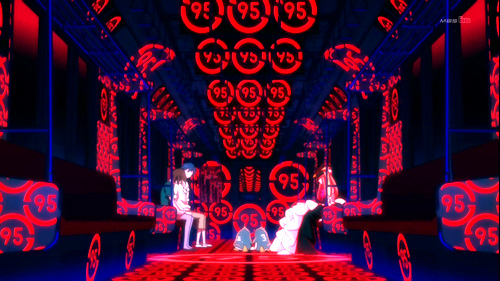 Featuring heavily in a show about the connection of compliance and resistance to fate and destiny with conceptions of family ties are explicit visual references to Aum Shinrikyo’s 1995 Tokyo Sarin Gas Attacks, with significant portions of episodes, particularly introspective moments, taking place in the underground of subways. As both children and as teenagers, the thoughts and actions of the main characters are intimately and profoundly affected by the events of a past terrorist gassing of the subway system by a cult organization they also share direct connections to. Symbolism features aplenty during the show, including that of the apple which carries direct significance to Japan’s immediate post-WWII years. In reference to a key opposition party to Aum’s recruitment activities within the show are families who lost most-to-all contact to family-members-turned-Aum-renunciates. In reference to Aum’s tenets are the fateful and destined coming of a revolutionary apocalypse catalyzed by a provocative action on the part of the show’s cult. 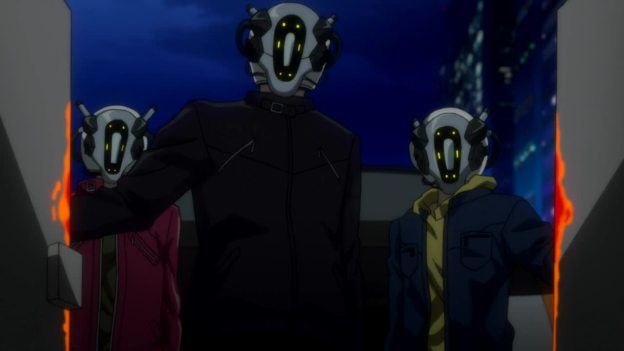 Taking place within the universe of a college student constantly resetting his college years in order to discover the rose-colored college life he has always dreamed of each episode, the main character in Episode 5 “Softball Club ‘Honwaku’” ends up joining a college softball club affiliated with a company whose culture that conflates pyramid schemes with cult tropes. Joining it because its friendly laid-back nature and gender composition gave him the seeming opportunity of scoring a raven-haired maiden, the sanguine atmosphere belies an undercurrent of anti-social resentment suppressed by purging exercises and fanatical devotion to company philosophy. It is complete with an airship acting as an arc intended to save the college club/company employees from a coming revolutionary apocalypse.

5 thoughts on “Cults and Anime Post-Aum”